HAVING MONEY TRADITION AND SUCCESS SURE IS TROUBLESOME

Share All sharing options for: HAVING MONEY TRADITION AND SUCCESS SURE IS TROUBLESOME

The St. Pete Times has a list of the top ten toughest jobs in college football and hits many of the gimmes--Alabama, Auburn, and any other school fond of training snipers on their coaches from day one and waiting with the finger poised just over the trigger--but we must disagree with at least one.

Ask Rich Rodriguez how tough this job is. This is a program that chased off Lloyd Carr, who never lost more than five games in a season, won at least 10 games six times and won or shared five Big Ten titles, not to mention he ran a clean program.

Michigan fans are many things: neurotic, doublethinking, fretful, brooding...but "chased off" doesn't exactly capture what happened to Lloyd Carr, no? Or account for the the luxurious red carpet and rich Corinthian leather given to Rich Rodriguez, who got a new weight room at the drop of a hat? They seem cooperative and patient enough....unless you're thinking like a Michigan fan...and that this could be just what they want Rich Rodriguez to think...just before pulling the lever to the hidden office trap door.... 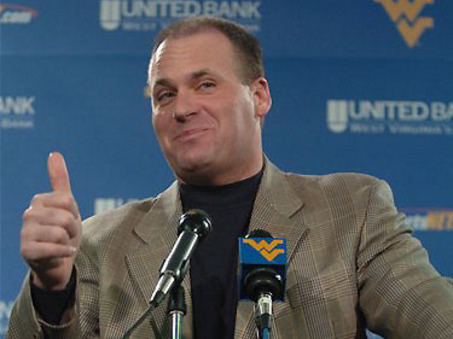 Millions of dollar a year and everything you want is OBVIOUSLY A TRAP.