Death does not concern us, because as long as we exist, death is not here. And when it does come, we no longer exist.

Joe Paterno is dying in front of our eyes, and that is no overly dramatic statement. His body is beginning the inevitable decline he staved off for so many year by running, staying involved in his job, and leaning on the good credit his robust genes advanced him in his later years. This is not a sentimental judgment: it's fact, as clear to the viewer as the cane he now requires to get from point A to point B or as obvious as his absence from the sidelines when he takes to the booth in the second half of games due to hip pain. 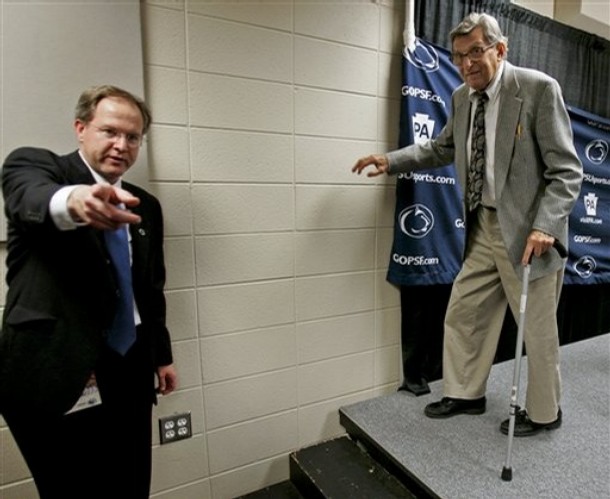 Brent Musberger may be annoying, predictable, and prone to over-excitement on the smallest play, but give him due credit for honesty in discussing the factors motivating Paterno's insistence on remaining on the sideline.

He is fearful  and he looks back at Bear Bryant as the example  he is fearful that he would not be with us if he stepped away. He is a man that doesn't fish, doesn't play golf...he has no other interest other than his family and football. And he's just afraid what would happen with the rest of his life if he walks away from it.

"What would happen" here is cloaked language for what happened to Bryant: death.

If you feel a vague unease at all this, at watching Paterno slowly deteriorate physically, it should be a familiar creep: it is the same sensation the smell of hospital disinfectant gives us, since everyone we've ever known kicked off in the perpetually swabbed and sterile corners of a hospital. It's the primate fear associated with anything reminding you of your own demise.

In the pilot of Six Feet Under, there's a debate about how death is dealt with in America: that it is too sterile, too impersonal, too well-packaged to properly recognize the moment. Nate insists his father's burial should be a more personal, emotional farewell than the standard packaged, gift-wrapped costume dramas they sell; David, the other brother, objects, but ultimately relents at the graveside.

We're more on Nate's side, as annoying as the character was, but would like to take it a step further: the unease surrounding Paterno is part of an overall gerontophobia, a fear of the old rooted in the fact that some deep, primal part of your brain recognizes that if you're lucky, you'll be tottering along in slip-ons and a robe at the end of the driveway as part of a four-minute ordeal just to get the mail. Many of you are scared of old people because they're "creepy," which we take to mean "close to death, and therefore death-y, and therefore 'creepy.'

To be fair, some old people may scare you for legitimate reasons. Many in our part of the nation have both guns and cataracts, a great combination resulting in festive fun for the whole family. ("Don't go over in the yard to get the ball, kid. That's how people die.") They do tend to be stubborn, they do remind you of death because they're so much closer (by the odds, at least) than you are, and they do have a statistically significant propensity for causing horrific traffic accidents.

However, Joe Paterno, as morbid as it may seem, may be living the dream: he's choosing both how to live, and potentially how to die. Most of our friends, when asked "how would you like to go," usually choose the Willie Nelson route of "being shot climbing out of a woman's window at 135 years old." The more common answer, however, would be "doing what I do," which in JoePa's case is to die coaching football.

This may seem creepy, but the fault would not be on Paterno, who being a Classicist by education seems Stoic in his approach toward death. Musburger may have been plying inside information, but he may have also ignored another, more positive angle on this: Paterno's fear of no longer being able to do what he loves, not what would happen if he stopped doing it. The fault is in the viewer, so insulated from aging and death that the sight of it in any real form obscures the fact that Paterno, in the form he's chosen, is doing his job as well as anyone in the country right now...and happens to be very, very old.

This seems less like a man worried about death, and more worried about how he's going to get through the rest of life in spite of the pain his body is experiencing--an Epicurean in the purest sense of the word to the end, and the current coach of the number three team in the nation. Let him live how he chooses. Whether anyone likes it or not, death will take care of the rest. The rest is useless worry, and a waste of precious life with the clock winding down.