Share All sharing options for: KNOW YOUR FRANTZ JOSEPHS

We're here to educate. The second-leading tackler in the NCAA this year is none other than Frantz Joseph, a mad-tackling linebacker from Florida Atlantic University who had 14 solo tackles in the game against Minnesota alone, and who has 75 tackles total in 6 games.

One clarification, though, that we would like to help with: he is not related to the former ruling family of the Austro-Hungarian empire. Unless they were Haitian, and we don't think they were. 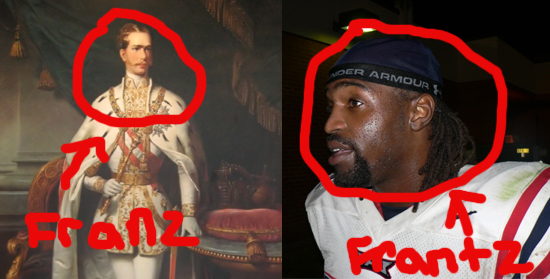 The EDSBS Education Initiative: Making the World a Better, More Awesome Place Through the Power of Microsoft Paint.