Share All sharing options for: ASK AN OHIO STATE FAN From time to time we like to invite a member of the Ohio State Fanbase to comment on their team's campaign thus far in 2008. Today, we present Kevin Banks of Columbus, Ohio, a diehard Buckeye fan and guest contributor to EDSBS. Enjoy.

I had to come on today because we have kind of a crisis in the Buckeye nation, and I want to address it head on and just come out and hit it in the mouth, because that's what we do at THE Ohio State University. We hit the shrugs and the weights and we then we hit people in the mouth like Andy Katzenmoyer. Just like I'm about to hit this red-hot topic right in the mouth like its name was Mike Hart.

Can you feel that? Oh shit, there, I said it.

It started gay, sure. A lot of good things start gay. Like hair product, for example. I don't hit the town without putting some shit in my hair to make sure I'm looking good, and it sure as hell isn't my grandfather's leftover airplane engine grease from World War Two. That shit catches flies in it.

No, I use a little bit of gel, which if you're honest with yourself, is something that started with the gays.

See, they're like pioneers. Pioneers who try stuff so you don't have to look stupid. When you see something you like, you take it from them, and then bang-o, they've gotta go try something new, because they don't want to be confused for poon-wreckin' sex hound like me, because I'm into women, and they're into dudes.

Also, they're like pioneers because they like cowboys and wearing leather. There's a lotta them out West, which explains my main point: the Pistol was gay, because it came from the WAC, which is nine times of Nancy-dancin' Scissor Sisters gay. All of 'em. Hawaii? Shirtless guy in a dress. Boise State? Buuu-rokeback! San Jose State? They're the Trojans. That's all you need to know, right there: THIS IS SPERM-TA! Up top! YEAH!

There's other teams, and they're all gay, too. But one of them thought up the Pistol, which was totally gay until Ohio State manned up and covered it in AXE body spray and got the bitches running. Just look at the old one:

The running back and quarterback practically start in a game of San Fran Leapfrog. I just wanna leave the two of them alone for some private time. We'll just be in the next room guys, and if you'd play some Cher to cover the noise, we'd appreciate it. That formation is clearly the gayest thing I've ever seen that doesn't actually involve two dudes fucking. Which I've never seen. Because I like chicks, and not dudes.

Whatever. I don't judge. All I know is that Tressel saw through the fog of Chanel for Men and thought: "Maybe I can totally ungay this by making this package un-gay with Terrelle Pryor and Beanie Wells, which would be the manliest thing ever." 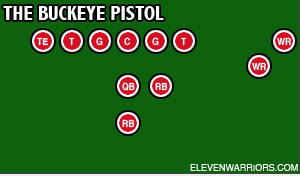 If you hear something at your door, it's a nude woman ready to go and hump it up with this scheme. There's three dudes in the backfield now, meaning it's like the extremely straight I-formation, but all bent up like a crooked dick. Some chicks really like those, so it's all good and hetero. Also, twins right with a tight end. AND TWINS!!! YEEESSSS!!! Nothing's straighter than twins, and I think you know what I MEAN!!!!

See, there's an accredited process here. Something's gay, which is cool, and I'm not judging or anything, even though I like chicks. More for me, man. That's all I'm saying. Anyway, then someone in power or cool or famous takes something exclusively gay like the Pistol and turns it into something ungay like the Pryor pistol, which by the way whipped some Badger ass on Saturday. Suck it, Wisconsin.

Before: Gayer than spending Christmas in Cockstown, Republic of Manassistan: 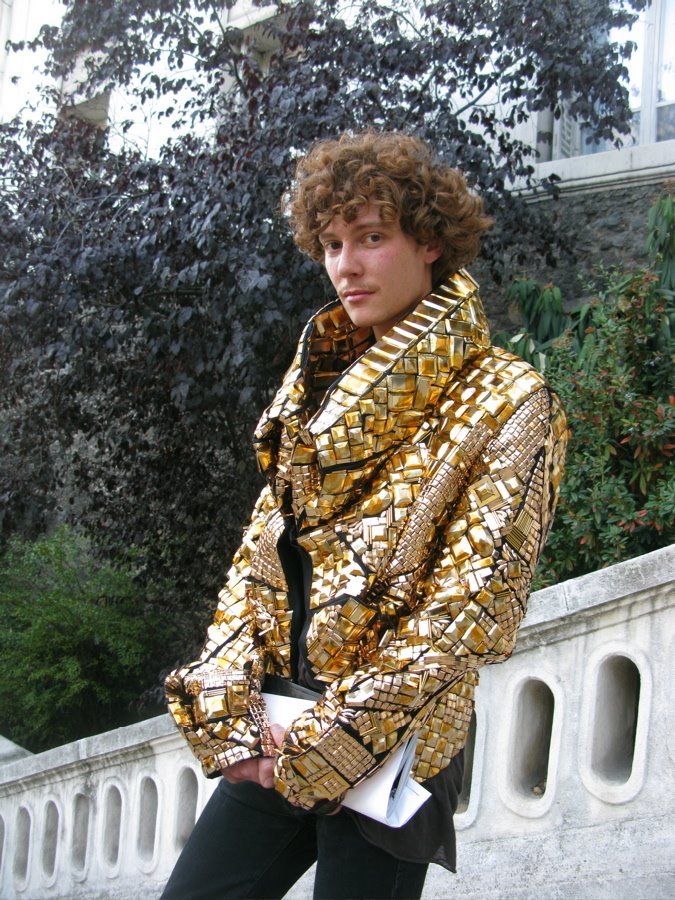 Hold it, though: we're about to reverse polarity here.

After: BOOM! What's the sound of 45,000 pairs of panties exploding all at once? THIS: 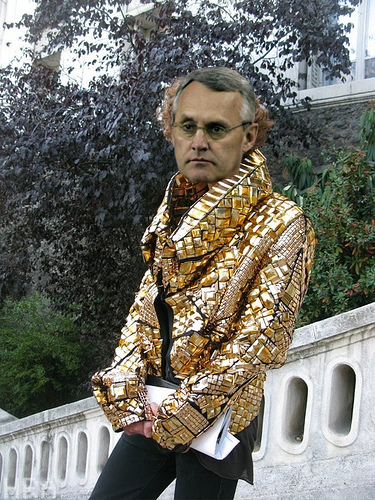 I'm ordering one in scarlet foil as we speak, and it's gonna get me more ass than a toilet seat at fat camp. Woman ass, that is.