We got to sit in on the Duke/Georgia Tech game this weekend, and it was, as you would imagine, the odd experience one should expect from a truly odd school: an enormous, two-story-tall inflatable Buzz hovering over the players entrance to the stadium in a "blackout" jersey, the catch-as-catch-can tailgating of the Tech experience, which just sort of happens wherever one can grab some open space and set down a generator, and pleasant experience of watching a college football game with an urban skyline looming just over the lip of the stadium.

You know that if your car breaks down on the way out of the game, you probably won't be devoured by wolves, and at the worst will be beaten, taken for your credit cards and cash, and then set on fire. Much better than being devoured by wolves, which we think really could happen with a few wrong turns out of Opelika, Alabama. It makes Tech one of the few places where the community around the stadium smells like urine all week long as opposed to only on gameday and perhaps the Friday night before. Consistency: it's important.

The big football-related deal, however, is the triple-option flexbone of Georgia Tech, an attack now seen two times in person this year. Being a believer in the trend of two, we believe firmly we can make the following judgments about the Jurassic Park of offenses in its return to big-boy, BCS conference football after seeing it twice. 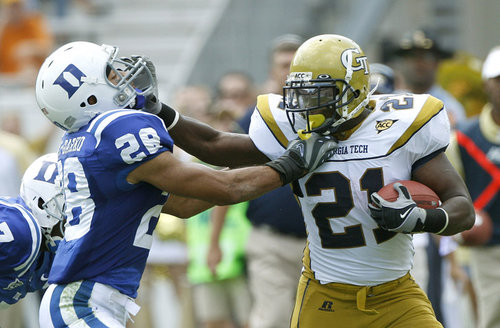 1. The offense starts with a colonoscopy. We've never seen a quarterback start so far up a center's ass in our lives as the initial start in the flexbone.

It's only marginally noticeable from television or the booth, but the quarterback starts in a low, low squat under center in the flexbone, presumably to allow the center to start in a full drive block and laungh out, but also to hide the fakery and handoffs going on behind the linemen.

The result, when viewed in a flash, makes it look like a third grader has gone and lined up in full gear for the play. It's probably also safe to say that the best developed quads on any quarterback in D-1 belong to Tech's qbs since they spend five to ten seconds on every play in Horse Stance. Sensei approves your disciplined pursuit of Horse Stance, but you must work harder.

2. The first halves will be ugly. For dual reasons: because Paul Johnson has to prod and poke the defense to see which part of the option the defense isn't defending (since you can't defend all of it all the time,) and because the other defense is working on full glycogen reserves and not gasping and wheezing on Tech's fifth eight-minute possession of the game. Yes, it was Duke, but the Blue Devils didn't really let Tech do much in the first half at all, and what they did allow happened only on the outside, not up the middle to Dwyer.

The second half, though, showed the lingering effects of being hit in the face continuously by a drudging, brutish offense: in every game we've seen thus far with Tech, the defense visibly wobbled in the second half, losing form on tackles and showing the lazy announcer's favorite obvious sign of fatigue: hands on the hips and panting visible from space.

3. Someone's open. As Demarius Thomas showed, when you're open in this passing portion of the option game, you're 24/7 and holidays open. The secondary can be thrown for loops when the outside game begins to work and suddenly getting off receivers' blocks becomes a matter of national security for them. Toss in, say, about 14 passes or so, and you have DBs choosing 1 or 0, and coin flips do not make for happy gambling football-wise.

4. It can work...enough. Given the offensive midgets of the ACC, the Flexbone thus far gets raves from us. It gasses defenses even on non-scoring drives, opens up big-play passing, and is simply but universally adjustable depending on the opposing defenses' strengths. Moreover, it's brilliant watching the aggression of the scheme up close: on every play the offense is surging angrily forward, and there are few downs where the defense gets to pin back their collected ears and dictate what's happening. At best, the opposing defense gets to grapple for control; at their worst, they're guessing at top speed who's going to keep the ball, and anyone who's ever had a high speed auto accident will tell you that the quality of those choices are poor at best.

Better still, it just seems to make a team nasty from the floor up: a contact-thirsty, pain-inducing, guns-forward offense designed to bludgeon up front and feint at the edges. Verdict: approve.