WHY YOU SHOULD HATE TENNESSEE: COUNTRY MUSIC

Share All sharing options for: WHY YOU SHOULD HATE TENNESSEE: COUNTRY MUSIC

Hate Week has been sluggish on these internets this week, mostly because the game itself looms like a possible blowout for Florida, Tennessee fans have been hedging bets and drinking corn liquor from boots quietly in their hovels to prepare, and Florida fans have focused their energies by bitching about Emmanuel Moody's lack of playing time.

So we had to dig deep to remember just why we hate the whole state of Tennessee, and suddenly one startling, shit-flecked reason splattered up from the depths of our subconscious: Nashville, Tennessee, where country music is processed, compacted, and then released on the world with a great farting noise from the anus of the country music industry. 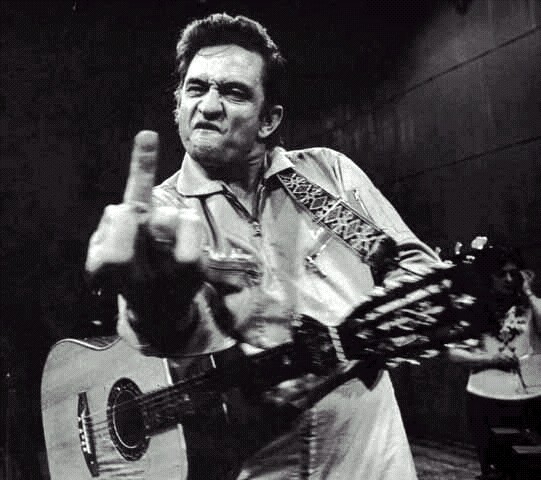 Johnny hated Nashville. So should you.

You know real country singers because they are either now all dead or semi-retarded from years of excessive alcohol and drug abuse. They did not have six-pack abs and did not manage their money. They died in fiery plane crashes and holding bottles of liquor; they clutched their hearts and fell to the ground when whole pieces of fatback clogged their arteries after years of eating vile road food. They were not pretty.

Their music was about life sucking, and oh wasn't that a shame, so let's just have a drink and forget about it. It was, on the whole, fundamentally honest music about life being hard for poor, violent, and uneducated people.

I had a barbeque stain on my white tee-shirt,
And you were killin' me in that miniskirt.
Skippin' rocks on the river by the railroad tracks.
You had a suntan line and red lipstick,
I worked so hard for that first kiss.
And a heart don't forget, something like that.

Okay: so you're poorly groomed, she's wearing a mini-skirt (of course), and you propose that you actually skipped stones on a river by a railroad track. How trope-ish of you to cite all of that campy rural imagery in a single verse! Live like you were dying! Oh, only if Tim McGraw. You and the entire industry cranking out music that tells people exactly what they want to hear about themselves and their lives.

Country music plays out now like some kind of long, dumbed-down daily affirmation set to a bland rock beat. You know it's "country" because occasionally they lay a fiddle down across a verse or two, or reference things like "railroad tracks" or "barbecue," or sing with obvious planted accents. Hey, Kenny Chesney just wants you to take it easy and relax! Like you were on an island! Not a coup-ish, violent island seething with poverty, but one a them ones where every thang's okay, and you and your baby got a couple a Coronas and nothin' to worry 'bout but your tans. HOO-WEEE!!!

That's one of our favorite things to loathe about country music--the demographic whores who run Nashville have this list of things to sandwich into every song. Hey, people like Buffett? Let's have lots of songs about how great the beach is! People will love that. Hey, a song about how your hometown is just dandy! And your children and wife are awesome! And everything you're doin' is right and good, man.

We would kill someone for a good song about spooky rural murder. In fact, we offer to commit one, just to have a talented songwriter witness it, and then compose a badass song about it. Toby Keith will be on one side, and we'll be on the other with an RPG. You and your Ford Truck and your shitty goatee, which you wear as the totem against obesity like every other hilljack concerned about their double chin and masculinity, will go up in flames. HOW D'YA LIKE ME NOW? That you're on fire.

To hell with the state for ruining a fine art form and for becoming the landing pad for spent hair-band rockers desperate to sell their second-rate midlife efforts to an audience with lower standards--namely, country music fans. (See: Bon Jovi. Who says you can't go home? Oh, only about half the population of New Orleans.)

They lap this stuff up like so much gravy soup at the Golden Corral. They made Patsy Cline go pop, dammit, as unpardonable a sin as has ever been committed in popular music. A populace who aids and abets in the production of such shit needs no pity when their football team bleeds out by thirty points on national television, and deserves none.