There's a reason you won't hear Big 12 teams chanting "Big 12!" after victories over out of conference teams. The first is that SEC teams bind together in such circumstances thanks to our cultural proximity to a barter economy, the rule being that the closer you are to actually exchanging animal hides for money, the more likely it is that you will bond with people with totally different power interests simply because of proximity. (I hate me some proles, but when we get to tusslin' with East Asia, we're all Oceanians!) 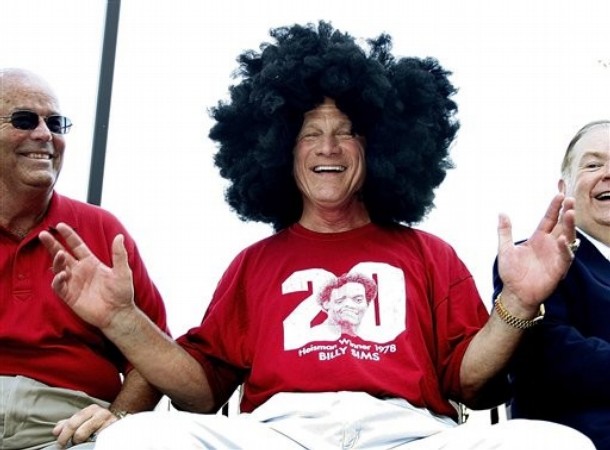 Barry Switzer in an afro has nothing to do with this post, and you don't care because it is awesome.

If the Big 12 are our new robot overlords--and it well and truly may be, per punditry--we should come up with something to chant to taunt other conferences, and not "big 12 football clapclapclap," since the kids on the Left Coast already bit that one, and you don't want to follow their lead, now do you?

That only leads to horrific losses to the Mountain West, and we like you too much to do that to you.

The early resume, though, is as cheap and tawdry as a weekend in Nuevo Laredo with Barry Switzer: poor Willingham'd Washington got annihilated by Oklahoma, Washington State took a double beating courtesy of Oklahoma State and (AAAAAGHHHHSSPIDERS) Baylor, and those are just the brand namers. The biggest scalps metaphorically on the board: Illinois, who Missouri outsprinted in St. Louis, and Cincinnati. On the whole, unimpressive. The only team who's proven much of anything is Kansas, who at least demonstrated baseline goodness by playing a tenacious game against South Florida, and thus shutting up assholes (us) who slagged on them for playing directional gimmes instead of actual games.

The literal scalp on the wall? Very impresive: Howard Schnellenberger's, who Will Muschamp delidded as the result of an ill-advised bet before the 52-10 FAU/Texas game. "It'll grow back," said Schnelly, patting the head-sized bandage and sipping on a barrel of scotch. "It always does."