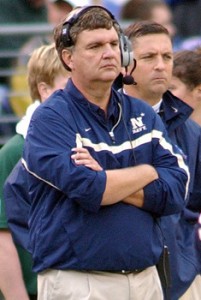 I'd smile, but that would just make everyone uncomfortable.

He also doesn't give a good goddamn what you damn teevee morons think, either.

He said that while watching a replay of the game, he heard the TV announcers questioning the move, too.

I think youve got to try to win the game, he said.

The guys who do the game, theyre moronsI dont worry about what they say.

Josh Nesbitt was sacked, and Virginia Tech took over.

For the record, the announcing team were two people named Terry Gannon and David Norrie, so we can't verify whether they're morons or not. If Paul Johnson thinks they're morons, though, we'll agree, especially if we turn around and see the Johnson looking over our shoulder right now, because we don't know if we could handle Johnson yelling at us. (No one likes to see a grown man in tears.)