BUZZ BISSINGER IS COMING FOR OUR WAY OF LIFE.

Share All sharing options for: BUZZ BISSINGER IS COMING FOR OUR WAY OF LIFE.

Grab your bitch rifles, campers, and call up the local stations. BREAKING BREAKING MUST CREDIT NYTIMES OP-ED COLUMN: Buzz Bissinger says college football fans are outlandish, and Nick Saban seems like an unpleasant fella on the sidelines! And he leads with "I am watching the Alabama-Clemson football game. Its a pretty good contest, actually", so we know we're in for a barrel a'giggles. With apologies to Fire Joe Morgan, let's cut this up a little:

I am just watching the crazy spectacle of it all  frenzy and bloodlust and the low rumble of moans and the high-pitch of screams. I wonder why we need any more studies showing our nations education system to be in the tank when all you have to do is attend a college football game.

This is still the guy who wrote Friday Night Lights, right? How do you immerse yourself in, of all places, Texas football culture and come away with the capacity to be startled by the fervor of any fanbase, anywhere, ever?

Nick Saban is the head coach of Alabama. I dont see much joy in Nick Saban as he coaches the Crimson Tide against Clemson, even though his team is playing rather well and will ultimately win, 34-10. I see a lot of determined marching back and forth by Nick Saban on the sidelines. 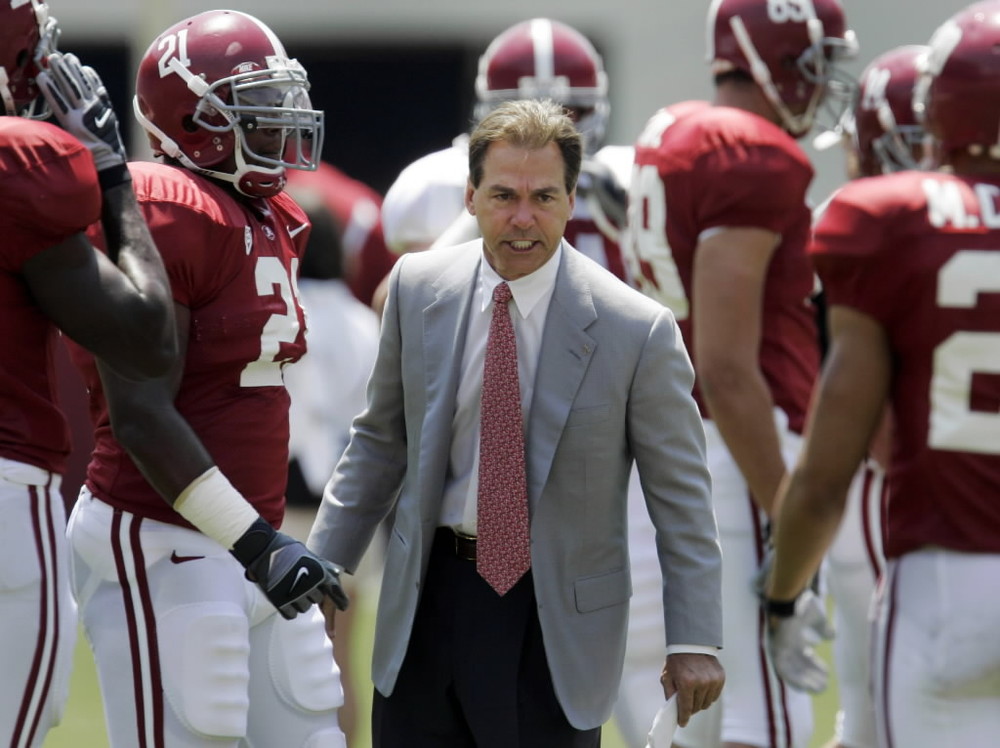 Saban, in a rare unguarded moment of glee.

What're you, new? Nick Saban does not "smile". Nick Saban, as our crack commenters are surely about to remind you, does not have time for that shit. Nick Saban's teeth may occasionally be visible in his gaping maw, but be assured it is merely a contorted rictus of apoplectic rage, not an expression of happiness. And isn't that why we watch him? He's like a Martian.

Nick Saban doesnt smile a lot, his face locked most of the time in a constipated grimace. But I understand that, because winning and losing a college football game in America is very serious business regardless of what I think.

And here's where we veer off the rails completely. I've read Bissinger's stuff before. I've been left with the impression that he enjoys football. So what's this, curmudgeoning for curmudgeoning's sake, just padding his word count until he can dig into the apparent crux of the column? Which is: Nick Saban gets paid a lot. Bob Stoops gets paid a lot. Kirk Ferentz gets paid a lot (and he misses a truly skewer-worthy opportunity here to talk about the return on investing in Ferentz versus Stoops and Saban). Nick Saban left this job this one time, after he said he wasn't gonna. NEWS TO US, this is.

"All in the name of college football." No shit, sir. Where've you been?