MIAMI, THE LAND THAT SHAME FORGOT

Share All sharing options for: MIAMI, THE LAND THAT SHAME FORGOT

The first time we went to Miami, it was in the midst of a long, chemical-addled college night. Someone had just eaten a whole stick of butter on a dare. Someone else was nailing aluminum foil to the wall and calling it wallpaper. Someone else was watching Akira and reloading the bong. Someone suggested driving down to Miami from Gainesville. It was an evening of numerous and equally absurd options. 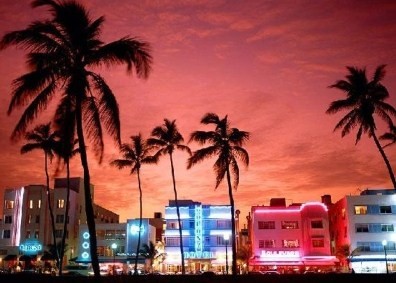 We made the obvious decision: drive to Miami. Having consumed somewhere between 3 and 12 beers, this made perfect sense at the time. After all, we had over one hundred dollars in our dirty little hands. One hundred dollars! That's more money than Tony Montana came to America with, cabron! We'll be stocked with backyard tigers and Michelle Pfeiffer braless and face down in a pile of blow in no time.

After a woozy, smoky blast down the Ronald Reagan Turnpike, we wound up at a hotel called "The Berkley Shores."

We fed donuts to the seagulls on South Beach, which started innocently enough and ended up with us sprinting like Tippi Hedren. We drank Miller High Life and watched as a woman in a white bikini bottom, sandals, and broad white hat berated a KFC cashier for "Not being a spiritualist, and that I'll get you for shorting me a thigh, I WILL!!!" We ate at the News Cafe. We watched impossibly beautiful people sunbathe and reapply gel, sunscreen, and other various creams.

This was around the same time when Miami football, having hit bottom, was just beginning its slow ascent from a bog of mediocrity under the last days of the Dennis Erickson era and subsequent NCAA violations. You may remember this period if we remind you that this is when Miami lost to Eastern Carolina, or when it was revealed that Luther Campbell had doled out cash to players for good play, or that things were going to hell in a Haitian handbasket in Miami, and that Da U was set to slide back into the sea from whence its serpentine, fanged form had crawled Cloverfield-like from just two decades earlier.

Head against the window, nearly incoherent with fatigue and the weakness of alcohol leaving the body, it was hard not to at first glance rule the city of Miami a free-fire zone, an unruly, intemperate beast inferred from its footprint: the waterstains marring nearly every building, the multiple tongues rattering away at each other in the streets, the perpetually surly service at every turn, the way blocks of South Beach revival gave way to abject, angry poverty in the span of a single street, the bizarre and invigorating lack of concern for anything embodied by four-lane swerves across traffic and the lack of any kind of dress code for anything.

We've been back numerous times since, and we've watched Miami football re-emerge, dominate, and then crash back into a different abyss since then. Trust your first instinct: monster is the correct word. The city and football team are inextricably linked in our mind, creatures of indomitable, chaotic potential, both feeding on blood, rage, and outlandish display performed without shame. So goes Miami, and consequently, so goes Miami football.

The rise of Miami in the popular imagination and the rise of Miami football were virtually simultaneous: Howard Schnellenberger's Canes team beat number one Penn State 17-14 in the Orange Bowl in 1981, the same year Time Magazine officially announced the transformation of the city from Shuffleboard Gulch to Cokemurderville, USA.

South Floridathat postcard corner of the Sunshine State, that lush strip of hibiscus and condominiums stretching roughly from Palm Beach south to Key Westis a region in trouble. An epidemic of violent crime, a plague of illicit drugs and a tidal wave of refugees have slammed into South Florida with the destructive power of a hurricane. Those three forces, and a number of lesser ills, threaten to turn one of the nation's most prosperous, congenial and naturally gorgeous regions into a paradise lost.

From there you get Scarface, Miami Vice, Cocaine Cowboys, and the bulk of the capital you may now see in concrete form along the waterfronts of downtown Miami. Miami attracted, and still attracts two kinds of people: the desperate, and the desperately ambitious. It is a place where Andrew Cunanan, a wannabe psychopath desperate for fame, would kill Gianni Versace for fame; it is the kind of place where the famous will get huffy for being noticed while driving a Maybach and wearing blinding amounts of jewelry, because in Miami this is considered subtlety.

Thus goes the team, especially in the glory days of the cocaine eighties: Randall Hill danced the creation of the unnecessary celebration rule into existence; he would later run out of the Cotton Bowl to perform the "six-shooter" without risk of penalty. The Blades' would become known for merciless taunting on the field and worse off of it. The team wore camouflage off the plane for the Fiesta Bowl. They hung out on South Beach. They got shot. When they won, they dismantled people and danced over their useless, crushed bodies; when the lost, they collapsed in historical, record-breaking fashion as they did against Maryland and Frank Reich.

To the staid burghers of college football, the victories and comeuppances must have been delicious in equal parts. Notre Dame and Penn State got to tsk-tsk at the classless new money of college football dancing on the ashes of tradition when they won, and when Miami lost they got to glory in their karmic shaming.

To someone like us, watching this from any number of houses in stops around the Sun Belt, Miami was a truly compelling beast: a program seemingly carved from nothing and featuring players recruited from what we now know as some of the poorest, most violent, and dead-end neighborhoods in Florida: Pahokee, Belle Glade, Liberty City..even when they beat Florida, and oh holy hell, have they beaten Florida in numerous, painful variations, it was impossible not to respect the anger, the rage, the bone-shattering violence their football teams played with: Ray Lewis, who played football to erase the records of his absent father; Warren Sapp, who barreled his way out of BFE Apopka to the U; Michael Irvin, who before he was a punchline was an indestructible receiver across the middle who came from the bowels of Fort Lauderdale and was one of 17 children; Ed Reed, who came from St. Rose, Louisiana, who put his heart in this shit, man.

A look down the roster of Miami's greats--their relatively privileged quarterbacks aside--reveals a roster of people who, given nothing, still managed to succeed. Randy Shannon, their coach, grew up in a house occasionally ventilated by bullets, ran in black garbage bag in the South Florida heat to lose weight for football, and lost two brothers and sister to AIDS.

Miami may be, if you ascribe any meaning to word, "classless." They may start brawls for no reason on the sidelines, they may ride boom-and-bust cycles of probation and championship every decade or so, and they may welcome the yellow flags following every touchdown celebration. They are also, like the city they spring from, monstrous and monstrously tough, a program and team impossible to be neutral about in any sense of the word. No matter the chemistry, you react to them.

Miami is a 21 and a half point underdog at Florida Saturday, a shocking line given the common roots of many on the two teams: Miami and Florida recruit much of the same turf, and whatever gag orders have been issued publicly are undoubtedly being violated quietly via text message and IM this week by players on both sides. Or at least, we hope they're being violated, if only because it would mean Miami, drudging through one of its down cycles, still had the distinct hammering heartbeat of a proper beastly villain.

We're taking Miami to cover, if only to fuel our need for a proper historical villain's survival, and to pay tribute to the vile, unkillable, shameless, tropical dystopia they represent. We hope they come in and lose, and lose badly, but that's fanboy shit entirely; we'll actually believe they're dead when we see the body revealed...and even then, with Miami being Miami, voodoo doesn't necessarily rule out a zombie revival and attack.