TAILGATING IN JUAREZ IS FESTIVE AND MURDERISH

Share All sharing options for: TAILGATING IN JUAREZ IS FESTIVE AND MURDERISH 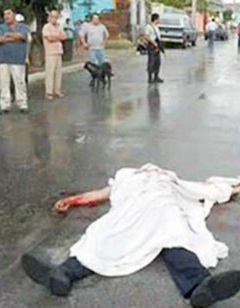 Probably want to skip "Drink and Drown" this year.

School officials from both NMSU and UTEP have issued warnings against going across the border from El Paso to the ever more charming city of Juarez, Mexico, where any gameday tailgating may inclue authentic Mexican cuisine (love those simple corn tortillas and green salsa!), the purchase of high grade pharmaceuticals from any number of cross-border pharmacies (ay, papi, love that percocet!) and perhaps being killed where you stand for no reason.

The travel warnings come as government officials and residents are asking the Mexican federal government to do more to stop a wave of killings across the state of Chihuahua believed to be linked to a raging drug cartel war.

More than 850 homicides have occurred in Juárez so far this year, including four killed in a shootout Wednesday afternoon and four men killed execution-style late Tuesday when they were handcuffed to each other, lined up and shot.

Students from both schools have traditionally gone over to Juarez to participate in "Drink and Drown," which in the best of years sounds like a recipe for blanked memories covering Grand Guignol horrors and transactions involving STDs, stolen credit cards, and weapons with the serial numbers filed off them.

Throw in a city in the spasms of open public executions by drug gangs, and this is probably a very, very good year to skip this whole thing. Unless you're stupid, and by all means, stupid finds its own level, meaning we couldn't stop you if we wanted to, brah. Go ahead and tape three hundred dollars to yourself and walk across the bridge like William T. Vollmann on holiday. When a pit bull is chasing you across the river on your drunken, bleeding swim back to America, don't say we didn't warn you.