Monday's Getting to Know U: Pac-10 profile of Cal quarterback Nate Longshore contained the following inaccurate paragraph: "Nate Longshore is a British Overseas Territory, 16 miles long, and 3 miles at her widest point. Boasting 33 white sand beaches with crystal clear waters, a contemporary international style, extraordinary vistas, world-class accommodations and mouth-watering cuisine, he is the culmination of your search for the idyllic tropical escape". The passage actually describes the island of Anguilla, and should have read, "Nate Longshore ranks fourth all-time at Cal in passing efficiency (133.1), sixth in passing touchdowns (62) and seventh in passing yardage (5,732). He has 18 victories as a starting quarterback, second in Cal history, and also owns the top bench press of all-time by a Cal quarterback at 370 pounds." We regret the error.

In Tuesday's Ryan Perrilloux Memorial Crime Blotter, we misidentified the victim of a threatening incident at a Utah intersection as Utes coach Kyle Whittingham. This was based on inaccurate sourcing, as Whittingham was at the Mountain West press day that day, and is strictly a French's yellow mustard man who describes Grey Poupon as "a bitch's condiment." We regret the error. 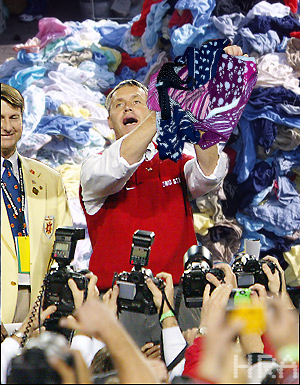 Wednesday also featured a reference to Howard Schnellenberger's "invasion" of the Philippines.

This is clearly in accurate, as Schnellenberger was born in 1934, making him ten years old during Douglas MacArthur's invasion of the Philippines.

Schnellenberger did, however, serve in Vietnam, where he picked up his lifelong habit of gelling his hair back with pure napalm and waxing his mustache with gun grease. We regret the error.

Thursday's interview with ESPN pocket analyst Lou Holtz misquoted the former coach on the issue of the death penalty. Holtz's enthusiastic support of the use of the electric chair in death-row cases was apparently nothing more than an enthusiastic request for more lemon water from a passing waitress. We regret the error.

In Tuesday's piece on SEC athletes headed to the Olympics, we described the difficulties of running track in the Beijing air and made reference to the Hinnik Air Quality Scale. We misidentified the scale's levels, which are clarified below.

We apologize to Dr. Jaro Hinnik, and regret the error.

Yesterday's Curious Index reported that the Tennessee defensive staff have implemented a "back to basics" strategy with its younger secondary players to prepare them for high-profile SEC matchups, administering a quiz to all underclassmen asking them to differentiate between their asses and a hole in the ground. The actual test question is pictured below, asking them to differentiate between a hole in the ground and former Alabama receiver/backfield bane D.J. Hall. We regret the error.