TOMMY BOWDEN FANNING THE FLAMES, WHICH DOESN'T MEAN WHAT YOU THINK IT MEANS

Share All sharing options for: TOMMY BOWDEN FANNING THE FLAMES, WHICH DOESN'T MEAN WHAT YOU THINK IT MEANS 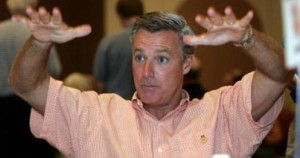 Tommy Bowden is uncomfy with your favorable assessment of his football squad, sirs:

The Tigers, who capped last season with a 9-4 record and ranked No. 21 in the final Associated Press Top 25, seem to be everyones pick to win the ACC. Well, that was until Tuesday.

Clemson coach Tommy Bowden did his best to fan the flames on his teams hot projections while talking with the media following his annual media golf tournament at The Reserve at Lake Keowee. Bowden even speculated whether his team deserves to be a top 10 squad when the AP and the Coaches polls debut in a few weeks.

Thus far, every preseason magazine has picked Clemson as a preseason Top 10 as well as the favorite to win the ACCs Atlantic Division.

I would say it would be premature, Bowden said.

Setting aside the fact that we're almost positive "fanning the flames" connotes exacerbating, not lessening---what is this, Oberlin? Are we to expect "A for effort" stickers to multiply on the helmets of the purple Tigers throughout the season? TB, we're as puzzled as you are to see your team creeping up the polls, but forth, and fear no darkness, brah. The ACC is largely devoid of entertainment since the fall of Miami. Let's see some showmanship. 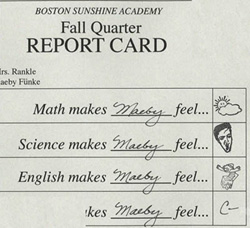 The Clemson Tigers: An alligator in spelling.