Last week's news wire ran an item from Reuters stating that Colombian politician and activist Ingrid Betancourt was freed from captivity by Colombian soldiers. New photographic information suggests that her release was orchestrated by a lone hero, whose photo appears below.

More information as it becomes available. We regret the error.

Coach Brooks has since informed us that while he has never visited the nation's capital nor made any public statement regarding his feelings on the Second Amendment, he believes a good squirrel knife ought to be enough for anyone.

"It's the blood that gives it the chewy edge and spongy middle," said Saban via phone on Tuesday. "The cream of tartar helps, too. But it's mostly about the blood."

In Wednesday's "ten best players you've never heard of," we described division 1-AA defensive all-star and Appalachian State Mountaineer Cookieland Seasyde Hollyberry as "The most explosive and underhyped defensive end of his generation, a block-shredding menace with a stance like a waterbug's and speed to match. How he fell to to the Mountaineers, we'll never know. With Cookieland on board, however, Michigan won't be the only big team to wind up on the snack plate for the boys from Boone!"

Cookieland Seasyde Hollyberry is not actually a football player, but is instead a prize pointer who placed second in the 2008 Westminster Dog Show.

Tuesday's profile of former Oklahoma quarterback Rhett Bomar contained several inaccuracies. Contrary to our reporting, Rhett Bomar does not sell Tennessee ham at a roadside stand on Highway 109. This is the plot of a hit Dixie Chicks single. Bomar is currently enrolled in Sam Houston State University, which, also contrary to our reporting, is an accredited university with an actual football program.

Bomar also has never killed a man he was in an abusive relationship and dumped his body in a lake. This is also from the plot of a hit Dixie Chicks song.

Monday's feature on contained a photograph that this paper admits was altered by the staff. The photo that should have appeared with the piece on comes from 's official site, and is an unaltered photo of the coach. The photo that appeared with "Tommy Bowden:Attack Dog for the American Football Establishment", where Tommy Bowden was quoted at a recent boosters' meeting as decrying "the anonymous slander and mindless mean-spirited BS of blogs." This paper then answered his critique in hasty, unthinking fashion. It would not turn out to be a good decision on the part of management, and we acknowledge this.

The picture accompanying the piece follows below, and represents a sad and juvenile moment of poor judgment by our editors. 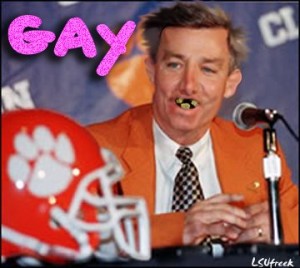 We apologize for any harm or hurt inflicted by the piece, and sincerely regret the error.