Monday's report that former South Carolina head coach and current television analyst Lou Holtz is being questioned by police following the death of a woman in his employ contained an inaccuracy. Brandii Shawn Baytes, 29, who had served as Holtz's assistant in his offseason career as a traveling magician since March, died from massive external hemorrhaging, not internal. We regret the error. 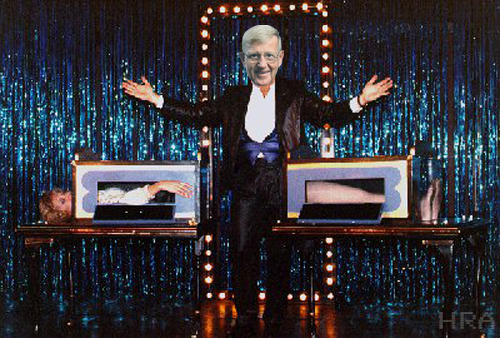 On Thursday, our interview with former SEC commissioner Roy Kramer contained an inaccurate quote that requires immediate correction. The printed exchange should have read as follows:

RK: The best part about being SEC Commissioner? The blood. Oh, the rivers of sweet, sticky blood.

The excerpts in bold should be replaced with the word "relationships I developed over thirty years of hard work." We regret the error. Deeply.

has found offseason employment as a wrecking ball for a high-end Knoxville area construction firm. In a statement released to EDSBS, Berry replies that he is merely a destruction enthusiast, and that this is only a hobby for the forseeable future, although he did express an interest in a career in missile interception. We regret the error.

On Tuesday, we reported that former Nebraska coach Bill Callahan donated several thousand of his old playbooks to serve as construction materials for levees in Iowa. A follow-up clarification and correction: Callahan only donated one, and it proved too large for transport even via heavy rail. Lincoln authorities are now considering burning the book to provide clean energy for the city's residents. Engineers estimate that the massive playbook could burn for "up to thirty years or more," potentially keeping Nebraskans warm for several decades or more.

Nebraskans are seeking alternative energy sources, as the incendiary Nebraska 2007 defense that kept hundreds of thousands of residents warm last year will no longer be constantly on fire under new coach Bo Pelini.

We regret the error. So does Nebraska.

Monday's note on Hawaii's opener versus Florida included an inaccurate reference to Hawaii's mascot, Vili. He does not, in fact, punt the fractured skull of Captain James Cook onto the field before every game. This in fact describes the opening gesture used by Bette Midler in her new Vegas show, "Bette! Fucking Hates Eloquent Doomed Explorers of the Enlightenment!" Only at Caesar's! Tickets available now! We regret the error.

(Vili should punt the skull of James Cook onto the field before every game, though. That would be straight diggity, thurr.)

APOLOGIES: EDSBS has received written apologies from the athletic departments of Ole Miss and LSU, expressing their regret that the jettisoning of head coach Ed Orgeron and Crime Blotter namesake Ryan Perrilloux caused a subsequent 60% drop in available joke material to our staff. We would like to extend our thanks to the schools for their consideration in this matter.

CONDOLENCES REDACTED: On Wednesday, EDSBS announced the death of longtime television personality and college football columnist Horace Greeley. Greeley was, in fact, not a college football writer, but the editor of the 19th century newspaper the New York Tribune, and died in 1872, and not this week. He was not a notorious frotteur with a penchant for rubbing himself on fresh produce, either, and never proclaimed himself emperor of Baltimore, as was also reported here. This was all erroneously attributed to Greeley when it was in fact Clay Travis of CBS Sportsline. We regret the error. All of them.