WE DIDN'T ASK FOR THESE POWERS

Share All sharing options for: WE DIDN'T ASK FOR THESE POWERS

We have a confession to make: inside our heart, there's malice. And, hopefully, blood. And, if you look hard enough, a pang of regret because we made a bet this weekend that came back to haunt us. No, it did not involve gay sex, $137,329.93 in unmarked bills, and Marvin Harrison's gun. No, we bet on a horse in the Kentucky Derby--and Kanu will be happy to corroborate this--and came damn close to picking the upset special.

Oh, look: here's a picture of how that all turned out! 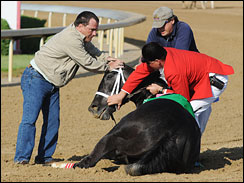 Yes, that was EDSBS' horse.

We bet on Eight Belles to win, and our confidence in the horse and proxy bet of ten American dollars resulted in a horse getting aced on the track, a horrified throng of fans weeping openly, and NBC directors hanging themselves in the booth trying to balance the horror of a dying thousand pound animal on the track with the need to mention YUM! foods and you know, the really happy people who actually won the race.

In short: we have powers. We didn't ask for them, but they've been given to us. Further evidence follows of our sadiM touch, the misfortune passing things we interact with casually, in list form.

Summer 1990: We go to our first concert: Stevie Ray Vaughn and Joe Cocker. In August of 1990, Vaughn dies in a helicopter crash. Shortly thereafter Cocker is found dead from an autoerotic asphyxiation.*

1999: We go to Nepal; shortly thereafter, the Prince goes nuts, kills the whole family, and the country is seized by a Maoist insurrection.

2008: We cover the SEC basketball championship. A tornado hits the Georgia Dome.

Ladies and gentlemen, we're not a scientist, but if that isn't a trend we don't know what is. Clearly, our very interest in something decrepifies it instantly. Therefore, we ask: how should we best focus our malicious energies this fall? A few suggestions we have pop into mind:

Wagering that Florida State will win the national title. And continuing to wish Bobby Bowden success in the glorious last victory through the ACC!

Betting on Bobby Petrino to finish almost the entire season as head coach at Arkansas. Really, he's like a tree now, roots and all.

Taking a fifteen dollar prop bet on Ohio State to get to the national title game versus a five loss SEC team and lose.

How else should we use these unintentionally harmful powers of ours? Besides betting on the Florida defense to definitely give up over 330 yards of passing a game again? Let us know in the comments. Seriously: we'll take donations NOT to bet on your team to do anything substantial. The effect is real: just ask South Carolina, who got crazyfaced with last year before watching them wallow in mediocrity in an impressive second-half slide.

*Or is still alive. Who's got time to look?