The EDSBS staff decided the "Stuff _____ People Like" had gone soft. So we therefore bonded over the one thing Tennessee fans and Florida fans can both crack out the sharp, stabby knives over: Georgia, a.k.a. Red and Black People, who ironically take their colors from two shades of people horribly oppressed in this very state. And no, it gets no nicer from here, and yes, we live here and love it.

Mandals. Don't want to wear socks, but don't want to look too gay/hippy/liberal with Jesus sandals? Rock yourself some mandals, Red and Black person. It's just all part of that "laid-back groove" thing you've got going on. Or being horrifically lazy. They're both Red and Black People concepts you'll see pass through time and time again here. 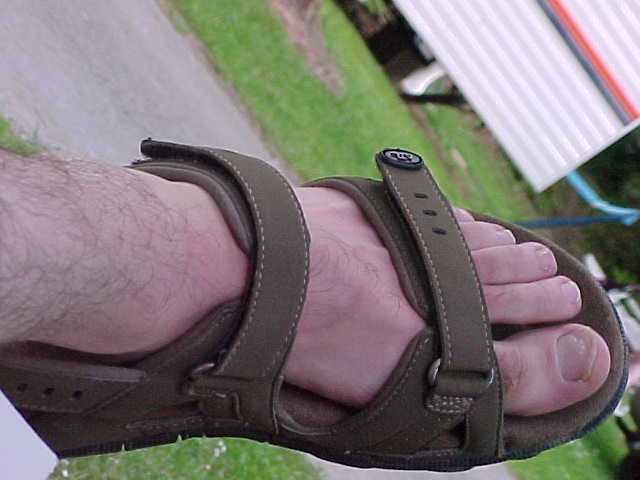 Obviously not a real Georgia fan, as he's not wearing white ankle socks with them.

Gwinnett County. Georgia has famously only traveled to play a football game somewhere else once, and it was to Atlanta to play Georgia Tech. Little known fact: every "road" game you might have seen the Georgia Bulldogs is in fact a simulation created by the Georgia Tech School of Computer Engineering, who does the work as a contractor for the University of Georgia. If this seems unusual to you, consider that Tech owes Georgia for the vicious but humorous practical joke of playing Reggie Ball at quarterback for four years (record: perfect! 0-4.)

Red and Black People will often brag fervently about not leaving the county for months, sometimes years at a time, 'cept for the obligatory odyssey 40 minutes up the road to Athens, where kids have "just gotten too weird for my tastes, frankly."

The love for Gwinnett County is balanced by a horror of all things Atlanta, including repeated warnings to "stay away from downtown!" You might catch black, gay...or worse still, Techie.

Cryogenic sleeping chambers. Red and Black people, it is our fervent hope that you lavished affection on your mothers before they reached the peak of ripeness, because they are now lost to you forever. At the age of thirty-five, the pancake makeup comes out, the hair goes "ash blonde", and Georgia women cease to age for the next fifty years, until an errant grandchild kicks them in the shins and they shatter into a thousand frozen shards.

Methodism. You call that half-assed sprinkling "baptism"? Our God is an awesome God, but a brahsome God wants your ass in the creek risking parasitic infection or mercury poisoning for His favor. And they do baptize babies, but we all have our trials to bear. Who says the South is a hostile environment for minorities?

Widespread Panic. At least the Grateful Dead inspired such loyalty as to make their fans put getting to the show above hygiene: "Panic," the universal beige hippie batik audio fabric behind almost all young Red and Black people events, is a noodle-y jam band so piss-poor their fans actually bathe and go home after the shows. In fact, Panic--and it's "Panic," never "Widespread Panic," doesn't even ask their fans to do so much as do that twirly hippy dance prevalent at all jam band concerts.

In fact, Widespread Panic doesn't really demand anything from their their fans except the purchase of a ticket and a prone position on the grass. If you're noticing a theme: Red and Black people are astonishingly lazy, and demand that their music be given to them in a tasteless, formless, and shapeless musical suppository taken aurally while lying prone on the grass of an ampitheatre.

Dude! Eighth solo! I'm SOOO high. Fuck you, Widespread Panic, because you have an all-organic, flabby, vegan-fart-smelling miserable weedstink all your own. We have recurrent fantasies of Dethklok's huge stage landing on a Panic concert and crushing everything in sight, leaving only Tevas and kind of floppy haircuts in its heartless wake as testament to the crap.

Pardon us. Dethklok already did just that.

Add the Panic sticker to your Ford Explorer so Dethklok can identify you for killing. Just having the "W: the President" and Bass Pro Shops sticker isn't enough, as you may be confused for any other Southern college student. 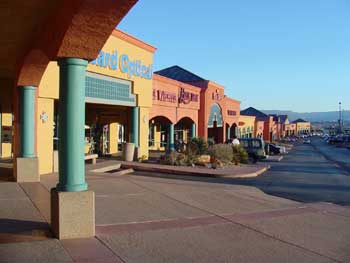 No, we're not walkin' to the Old Navy. It's ALL THE WAY ACROSS THE PARKING LOT!

Goatees: Mostly for the older men. Like the finches of the Galapagos, the mustache changed its shape under evolutionary fashion pressures. (If you went to school in Cobb County, just insert "JESUS TOUCHED THEM WITH HIS GENETIC CHANGE-O-STICK AND MADE 'EM DIFFERENT JUST CAUSE AND THAT'S WHY HE MISSED THAT WHOLE RWANDA THING SORRY BOUT THAT.")

Somewhere between 1986 and 1989, the mustache became an unacceptable familiar of highway killers and serial rapists, mostly because most highway killers and serial rapists did indeed seem to have mustaches. This brought forth a dark period for mustachioed men: what to do? Sail on 'til the world spins my way again fad-wise and go against the grain of social convention, or--heavens!--shave. And because Stone Cold said so, the goatee took an unlikely step away from the "facial hair of choice for Ministry fans" to "the mustache with a basement add-on." You know this is true for one reason, Red and Black people: your church's youth pastor has or had one. It also "covers" a weak chin, meaning it "makes every one notice how you grew a goatee to hide the slack flap of skin between your lower lip and Adam's apple." Only the chinstrap beard screams "compensatory facial hair" more than the closely trimmed goatee, and yours is most definitely closely trimmed, Red and Black person.

Bud Light. In a coozy, motherfuckers. (Your pastor heard you read that!) You can drink four hundred of these in a weekend. So can anyone else, but you'll tell everyone exactly how many you drank, because Red and Black People are beer accountants of the first degree. Also, in keeping with the extreme laziness of Red and Black people, Bud Light comes in unbreakable bottles you may throw directly on the beautiful green lawns of the UGA campus. (Seriously, it's gorgeous until game day.)

Bud Light, while preferred, is not perfect. Only when it comes with pull-tab spouts on the bottom of the bottle will perfection arrive, as gravity will do the work formerly done with all that strenuous lifting of the hand to the mouth by the arm.

Black guys, and not black chicks. Black dude? No problem. Seriously man, no problem. Hell, if my sister slept with Knowshon Moreno, I'd take pictures and tell her not to use birth control. Her vagina would at least put up more resistance than Florida did last year. Black dudes are cool. You can even take 'em to Panic concerts! They just groove right in. No problem there.

Black chick? Um, can I be real honest with you? Their hair freaks me out, man, and I'm afraid they'll laugh at my penis when I get naked. But Knowshon can bang my sister. Any day, man. Her hoo-hah is his endzone, and I'm signalling a score with both hands in the air, like "WOOO GO DAWGS! SIC 'EM ROO ROO ROO ROO ROO!"

Baseball caps with frayed bills. Mandatory. Should look like a wolf has been nibbling on it.

Golf. Lazy strikes again. Red and Black people choose, as their primary sport, the indolent form of horseless polo that plagues this state: golf. And if forced to choose between walking around the "natural" contours of a golf course or watching football, we tell you this, football fans: there would be trepidation in the ranks.

Golf: it sucks, and Red and Black people love it.

Consider all of the key ingredients contained in golf: doing very little, drinking shitty beer, and wearing golf shirts. Triple score, Red and Black People. The slavish worship given the Masters--a course started as a tax dodge by wealthy New Yorkers in the 1930s and run by assholes who wouldn't let lowly plebe you take a solid gold shit on the course--actually diminished the attendance of the spring game for years.

You may also pee outside and it's totally acceptable. This is another thing making golf irresistable to Red and Black people. (Editor's note: we'll endorse this aspect of golf. Especially peeing on your fellow golfer mid-swing. "Hey, they turned the sprinklers on early!" Hilarious!)

One way head: A.K.A, the Athens Frat guy special: he gets it, you give it, and then the whiskey ends the evening. Judging from the trials of our single friends in Atlanta, this sexual phishing scam extends well into adulthood.

QuikTrip. It involves buying cheap gas, having minorities wait on them, and purchasing sugary beverage and beef jerky. All are TOPSCORE for Red and Black people.

Dickies. Yes, the red ones. Red and Black people enjoy remembering exactly one thing to accompany every event or turn of events. Football game? Seal bark: "ARP! RED PANTS!" LSU fans? "ARP! CORN DOGS!" Florida fans? "ARP! JEAN SHORTS!" Atlanta? "ARP! DON'T GO DOWNTOWN ARP!" This whole post? "42-30 ARP!" The uniform consistency of responses is seal-like, and will win you bar bet after bar bet with strangers who doubt that any one group of people outside the Midwest could be so homogenous in behavior and belief. ARP!

Hemp necklaces: Hippie, and not gay. Thrown away the instant you start interviewing for clerkships in law school, a sad moment because, you know, that kinda skinny blond girl gave it to you.

With the cap, the sandals, and the option of growing floppy Bama Bangs (brand-neutral name? 'Brah Blinds), it's all part of a carefully composed "casual" look that lets people know you are in "college."

Boiled peanuts. Holly put this one on here like it's a bad thing, but we adore boiled peanuts. No foul here, even with the stuttering crampy shits boiled peanuts inevitably give you in the 24 hours following consumption. Get me a Bud Light--don't forget the coozy!--and we're snacking and macking, man. And seriously, if your pastor walks by, we'll hold the beer.

Chik-Fil-A. Double bonus on good things Red and Black People like, because we start off every morning of every day craving the battercrack of Chik-Fil-A. Including Sundays, when you churchy little nancies take the day off to "spend time with family" and "not make me the goddamn chicken sandwiches that we start shaking if we don't eat at least one of a week, YOU HEARTLESS BASTARDS!!! A REAL GOD WOULDN'T LET THIS HAPPEN TO ME WHEN I WANT IT ON SUNDAYS!!!"

TCOAN is fond of asking me if we want Chik-Fil-A. The answer is always yes, and then a quick glance at the calendar reveals it's Sunday. She smiles, and then goes back to reading her book. This is how you break a man one snap of the bone at a time, reader.

Herschel. All 237 personalities of him.