WHAT? NO MORE TIME ON THE JIGGLY BELT?

Share All sharing options for: WHAT? NO MORE TIME ON THE JIGGLY BELT?

Ivan Maisel turns in a nifty piece on Michigan's discovery of modern conditioning, including the construction of a new million dollar weight room and the post-workout wonders chocolate milk consumption can achieve.

After two months under Barwis, here's what's going on: The Michigan players look and feel different. Mathews went from being able to touch his toes to putting his palms on the ground. He had to buy size 36 jeans to accommodate his thighs. His waist remains a 34.

"I need a new belt, too," he said. "We could see our bodies adjusting. Everybody is taking their shirts off, wearing tight-sleeved shirts."

Hawt. And also likely bliss-inducing for those who complained endlessly about the Wolverine's antediluvian use of jiggly belts, chest expanders, wall-mounted pulleys, Charles Atlas manuals, and wooden dumbbells in their previous routine. Judging from the pics, that's all out on the curb with the old Nautilus rowing machines and Exercycles: 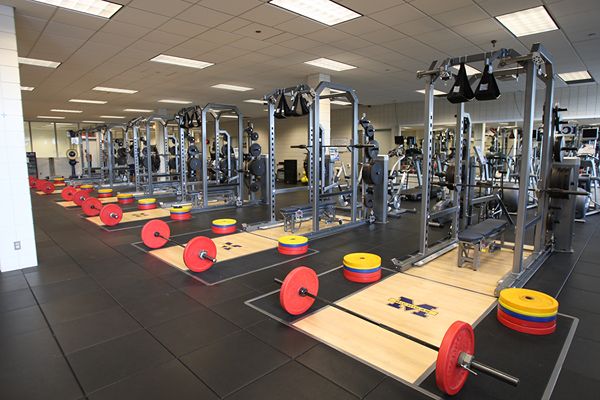 At last: Michigan gets a proper pain mill.

For comparison's sake, footage of Michigan's old training room under Mike Gittelson may be found here.