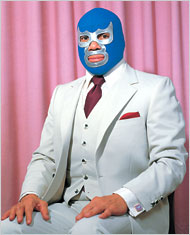 We support you, Senor Sanchez.

USC QB Mark Sanchez is a Mexican-American, and wants to show his pride in his heritage by putting his money where his mouth is--with his mouthpiece.

Against Notre Dame, Sanchez wore a mouth guard that featured the colors of the Mexican flag, which was made at his request by the team dentist.

"He put the eagle with the snake on it -- it was looking sweet so I had to wear it," said Sanchez, who is of Mexican descent.

Sanchez's stint at qb has created the hint of a quarterback controversy, something which may abate if Sanchez performs well in the beehive din of Autzen Stadium this weekend against Oregon. Our editorial position just shifted to Sanchez for starter for two entirely logical reasons:

1. We're huge fans of NAFTA, and we're sure that Sanchez is the more NAFTAish qb, being the product of a Mexican import. Adam Smith, represent!

2. His fans wear Mexican outfits in the stands:

"Sanchez said he enjoyed supportive gestures from USC fans. One wore a serape and others have donned wrestling masks.

"That's fun. I love it. It's just all part of it," Sanchez said. "The band's going to start playing, 'Lean Like a Cholo,' or something. Sweet.""

As long as this doesn't get Carlos Mencia involved, we're on board the Sanchez bandwagon. A world with more wrestling masks is a world we can live in happily. Sanchez has taken the majority of snaps this weekend, and will likely get the start versus the Patos de Oregon.