Guest editor Hannibal Montegna brings you your viewing guide for week two. It's awesome and powerful like an enraged pregnant woman. 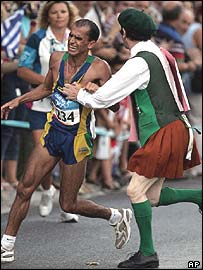 Be forewarned: Saturday's slate is a true gauntlet, fourteen hours from start to finish, and therefore a test of wills for the dedicated. Only the strong will survive, physically, mentally, gastrointestinally. Look at that couch and command it: "You will yield to my ass." Make clear your long-term expectations of that 32-pack of Shiner Bock: "Sobriety is the enemy, and only you wield the sword." If your significant other objects to an entire day, and a night, and part of the following morning, spent awash in heavily-padded collisions among young adults you have not and will never meet, question the destination of this relationship. Is he/she right for your lifestyle? Does he/she respect the pursuits that are truly important to you, which do not necessarily include health insurance? If for some reason you were to propose, would you secretly fear he/she would push for a fall date, and not understand your resistance? Does he/she really respect you? These are indeed deep questions to ponder. But only during commercials.

Wait, what am I saying? Commercials are only an opportunity to flip to the backup game. The introspective shit can wait for Sunday, during the four-hour beer ads occasionally interrupted by helmeted professionals running down the clock. This day, you can only be bothered with one thing...

TGIF, UNLESS YOU HAVE NOTHING BETTER TO DO THAN WATCH...
NAVY at RUTGERS (7:00 • ESPN)
Rutgers blanked the Middies 34-0 last year when Navy QB Brian Hampton went down and the fabulously-named Kaipo-Noa Kaheaku-Enhada was a disaster in his place. Kaheaku-Enhada is dramatically improved from that afternoon, but Navy is no bigger in its futile bid to stop Ray Rice or less susceptible to the chaos regularly wreaked by the quick, penetrating Rutgers front. Watch For: If it can block it, Navy's triple option is always a nostalgic marvel of deception.

If vowels were touchdowns, Kaipo-Noa Kaheaku-Enhada would win the Heisman™. As it is, I think he's some kind of Polynesian fish.

THERE IS A TATOO. HAVE IT REMOVED BEFORE...

Main Course: MIAMI at OKLAHOMA (Noon • ABC)
Sam Bradford was the hottest quarterback in America in his first ever game action – againt North Texas. Which, new white helmets notwithstanding, is not Miami. Still, I suppose that's better than missing a majority of your passes and falling short of 100 yards passing against Marshall. Hello, Kirby Freeman... Watch For: Oklahoma's cat-quick DeMarco Murray, on the big stage for the first time, and who the Sooners would rather carry the very low-scoring day against the still-vicious 'Cane D than fellow redshirt freshman Bradford.

On the Other Channel...
NEBRASKA at WAKE FOREST (Noon • ESPN)
Sam Keller couldn't be happier to be facing Wake Forest, which last week gave up 400-plus passing yards to Matt Ryan – if Bill Callahan deigns to let him throw after running 70 times for 400 against Nevada last week, it'll be just like back home in the Pac Ten. On the other side is first-time starter Brett Hodges, he of the nondescript comeback effort last week in Chapel Hill after Riley Skinner became the second Wake starter to go down in the opener in as many years. What goes around comes around, Skinner – Pipp gets Pipped! Watch For: A brief ceremony that takes the relationship between Wake Forest and BB&T Corp. to the next level by changing the name of Groves Stadium, as it's been known for 40 years, to "BB&T Field."

WEST VIRGINIA at MARSHALL (11 a.m. • ESPN2)
Big-play West Virginia had zero runs longer than 18 yards against Marshall last year, and still ended up topping 300 rushing for the game in a 32-point Mountaineer cakewalk. Kicks off earlier in the morning, if you're the early-rising, sadistic type. Watch For: Two teams from West Virginia + one stadium = twice the couches on fire. I understand a "Coal Bowl" logo is in the works featuring a smoldering love seat.

Provincialism: The Big Ten Network got so freakin' lucky last week with that Michigan game and another improbably great finish in Minnesota, and if you're of the Midwestern (and non-Comcastian) persuasion, Bowling Green at Michigan State, Nevada at Northwestern and the Ohio-based Miami's visit the Metrodome might prove of some eventual merit at noon, though Eastern Illinois at Purdue should be a one-sided stat-padder that makes Curtis Painter look halfway decent at the end of the year. Your local Lincoln-Financial affiliate gets its 2007 on with potato chip-sponsored clunkers in the ACC (Duke at Virginia) and SEC (Alabama at Vanderbilt), the latter of which will get "better than you expected!" buzz but will not be better than you expected. And Rhode Island-Army, despite its presence on ESPN Classic, is no such thing, except as an example to keep viewers away in droves.

Main Course: OREGON at MICHIGAN (3:30 • ABC)
Oh, the intrigue: surely Michigan comes back breathing fire and grinding bones to make its bread in the trenches in that very methodical Michigan way, a manner that would seem especially attuned to exploiting a run defense that had its worst season in a decade last year and opened 2007 by allowing 315 yards on the ground to spread-based Houston. The Ducks are Mike Hart's kind of defense. But Oregon's offense presents precisely the challenge Michigan's defense has yet to solve the past three years, regardless the coordinator: Dennis Dixon is an athletic quarterback (he had 140 rushing last week, including an 80-yarder) working from the gun with the experience and passing acumen to exploit the Wolverine secondary in, well, in that very Michigan way. Watch For: If things go badly, listen for famously sedate Michigan Stadium to fall completely silent. And then, somewhere in the vast sea of eerie, vacuous quiescence, a lone gunshot rings out... 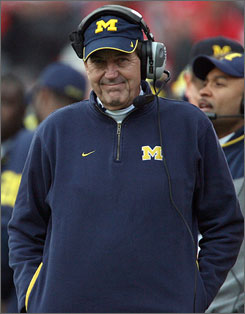 Lloyd Carr has to be honest: This is his last year, and...he's pretty much already checked out.

On the Other Channel...
N.C. STATE at BOSTON COLLEGE (2:30 • ESPN2)
Boston College had a big, high-flying win last week over the defending conference champ, and N.C. State lost its home opener to Central Florida, but both teams have questions of sustenance at quarterback, where Matt Ryan threw for a career high for BC and Harrison Beck came off the bench to lead a 20-point second half rally that nearly tied the game in his first career action. Sympathy here for Tom O'Brien, underdog, who could be known to Eagle partisans after leading BC to a loss in Raleigh last year as the coach who could take his'n and lose to your'n, and take your'n and lose to his'n. Watch For:If nothing else, the unavoidable "O'Brien Back in Beantown" angle here ought to be worth at least one shot of a section of comely co-eds wearing a clever, tight-fitting shirt at their old coach's expense. Or is it already coat season up there?

FRESNO STATE at TEXAS A&M (3:30 • FSN)
The Bulldogs try to revive the old "giant killer" tag against a defense that allowed 400 yards last week to Montana State. Watch For: A&M's "Thunder and Lightning" running back combo, 280-pound Jorvorski Lane and human Lambourghini Mike Goodson, the only one of many sharing that name I secretly suspect could produce real thunder and lightning under the right atmospheric conditions.

Provincialism: Western viewers will be shown Cal at Colorado State on CSTV (2 p.m. Eastern), Boise State at Washington on Fox Sports Northwest (3:30 Eastern) and, less promisingly, Utah State at Wyoming on Mtn., whatever that is.

THE WILD CARDS
SOUTH CAROLINA at GEORGIA (5:45 • ESPN2)
NOTRE DAME at PENN STATE (6:00 • ESPN)
TCU at TEXAS (7:00 • FSN)
Oregon-Michigan remains the trump game, as long as it's close, but otherwise, your decision on this nice crop of early evening games should be made geographically – but give it a twist, homer. Instead of tuning in to the game up the road, try to broaden your cultural horizons; if you're in the South, try dialing up Notre Dame and Penn State, perhaps attempting to decorate both teams' curiously naked helmets by strategically aiming tobacco juice at the ol' pitchure box. Rust Belt denizens might derive some rare satisfaction by reflexively cursing the president's home state (and religion, if you go for that) for three straight hours of Texas-Texas Christian. And Texans should watch Georgia and South Carolina to scout locations of its long-planned annexation/conquer of the entire Sun/Bible Belt. The world is a better place when more people can relate to the traditional drunken revelry, defeat and mockery of others. Watch For: Notre Dame is bound to be more competitive, but South Carolina with Blake Mitchell has to make its move now in the premier SEC game of the week or fall into familiar catch-up mode for the rest of the year.

Provincialism: Mtn. is back with Air Force at Utah (6:00 Eastern), which any Mountain West fan with the option should skip for BYU at UCLA on Versus at 6:30, at least as good a game as any of the three national games above that very few people will see. Only alumni will want to catch North Carolina at East Carolina (6:00 Eastern, CSTV) or Western Illinois scare the hell out of [Team Redacted] (7:00, Big Ten Network).

Main Course: VIRGINIA TECH at LSU (9:15 • ESPN)
Wow, I do mean late night with this one: with kickoff at 9:15 on the East coast, emotionally invested Virginians won't be able to think about turning in till this one ends around 12:30 a.m. Sunday. What is this, the World Series? On the other hand, nobody in Louisiana goes to bed until around 4 a.m. most nights, anyway, if by "go to bed" you mean "pass out with a stranger in a public doorway while tearfully professing your guilty love for Nick Saban," for the lucky ones. Ah, to be twelve again... Watch For: The satisfaction of knowing the real final score, which at least one deadline-pressed AP voter is almost guaranteed to get wrong in the wee hours. On the Other Channel...
SOUTH FLORIDA at AUBURN (9:00 • ESPN2)
The Bulls have been floated all offseason as a potential sleeper and should present at least as much of a challenge to Auburn as Kansas State did last week. And have the same trouble converting positives into points. Watch For: Matt Grothe's "Heisman campaign," falling to pieces in the fourth quarter courtesy of Quentin Groves.

Provincialism: No one who saw Syracuse open against Washington could possibly want to watch the Orange visit Iowa (8:00, BTN), especially Syracuse fans, if there are any left. For the far West types: in-state blood! on the line in New Mexico State-New Mexico (9:30, Mtn.) and Bret Bielema takes off the second half to hit Balley's when Wisconsin buries UNLV (10:00, Versus).

IF YOU'RE STILL AWAKE
COLORADO at ARIZONA STATE (10:15 • FSN)
Big momentum game for sketchy 1-0 teams poised to go south quickly with a hit to their confidence; the winner could conceivably creep into the bottom of next week's polls. Projected final gun: 1:30 a.m. Eastern, if there's no overtime or overly-enthusiastic passing. Watch For: Because it's there, dammit.