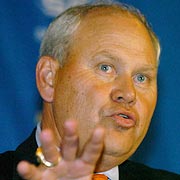 In looking for signs that Phil Fulmer is guaranteed job security for life, we lean on Mark Bradley suggesting that he's going to be fired in the first week of December. A sportswriter going on the record with that kind of certainty is like having the CIA pronounce a country as "stable" and "bound for prosperity," meaning that it's seconds away from bursting into flames and becoming thirty different countries all ending in "--stan."

Yet for those looking for signs of impending doom, you can either monitor the sales of batter fried porterhouse calzones at Calhoun's ("Eat the Whole Thing, And We'll Throw Your Dead Body in the Tennessee River Free Of Charge!") or just rely on the fact that satire has brought you the Talking Fulmer. If fire[nameredacted].com is any indicator of sites devoted to mocking coaches, Fulmer's days are numbered like the calories in a package of pork rinds, though nowhere near as numerous.

PS. Because we're doing little more than just sitting on ass today (our own, of course,) we'll be live-blogging the College Football Live show on ESPN today. You have been warned.