Semantics are everything, but we have to clarify this: Al Groh sucks, but he is not categorically "the worst" coach in the country right now. He's close: the mumbling, the anti-charisma that surrounds him...remember scenes in films where evil men trod the soil, and flowers wilt all around them? Al Groh has a similar effect, but with the color palette: everything he walks past turns a uniform shade of beige. (The radios all turn to the Clear Channel BEST STATION TO LISTEN TO AT WORK, too.)

At least Groh produces NFL draft picks, one of the bits of evidence Stewart Mandel cites in his list of the five worst coaches this year to prove how bad Groh is. (Braves and Birds, file and save for the next installment of "Duel of the Jews". You're welcome.) He also plays a wicked synthtar on Guitar Hero, and has produced a whole line of instructional booklets.

1. Sylvester Croom. No one wants to put him on this list because of the huge, huge challenges Croom faces as the head coach of a program located in a town lovingly referred to as "Starkganistan." They do exist, but Croom's made a slew of mistakes as head coach, most notably attempting to run his version of the modified West Coast offense (a complex, often too complex system for college) with personnel who can't possibly execute it. In three years, he's failed to find talent to match, either. 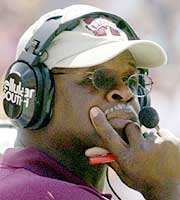 Logically the only other person who could be worse than Croom. Of three victories last year, two preceded the losing coach's firing or "departure": Mike Shula at Alabama, and Watson Brown's departure at UAB. Croom's only other conference win not over Ole Miss or Kentucky...

2. ...would be the one that got America's other worst coach fired.