Share All sharing options for: THE RULES, 2007, PER MESSRS. BEAN AND SWINDLE

Phil Steele is off the press. Without the structure of practices and the watchful eye of coaches, player arrests are mounting. And the low-hanging fruit which are Stewart Mandel mailbags are back on our internets. (Wait... savoring that one... Okay. Stew! Love ya babe!)

Yes, college football is on the horizon. We're not exactly close, but we're getting close to the time when it's close. Fall practices will kick into gear in six weeks. Conference media days won't be far behind. Preseason polls (for 2008) should be available for perusal any day now. 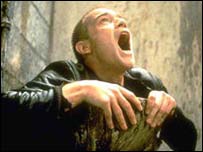 Our nightmare is soon to end, college football fans. Ignore the baby on the ceiling.

Before we get too close, though, and the excitement of it all overwhelms us, Peter Bean and Orson Swindle humbly offer a set of proposals, which we pledge to follow. If you're inspired to join the Movement and sign with us, there's more than enough room on the train.

However, as we're suspicious of any movement that would have us as a member, don't join. It's surely disreputable, will cause hives, and will ruin your credit. Fair warning.--O.

1. We will not participate in the Conference Wars. We won't be shy to look closely at schedule strength in talking about our dear sport and the ranking of teams therein, but we solemnly swear to avoid the tired, generic Conference War Chest Thumping.

2. We will actively abstain from 1=1 thinking/writing. Wins are good, losses are bad. You're smart enough to figure this out on your own. We're here for the curly fries, please, and not the standard potatoes you can find anywhere else.

3. We will abstain from constructing an All-American team. Until our requests for film of every game played gets approved by every university, we'll politely decline the temptation to construct such a list. Truth is, we don't know. There are better ways to talk about the keepers.

4. We will not break down a Stewart Mandel mailbag. This was a hard one for us, but damnit, we're drawing the line in the sand. When we fry fish in 2007, we'll be gunning for dolphins, not minnows, dig? Plus Braves and Birds has already perfected this form, anyway.

5. When referring to a team's ranking, we will use the BlogPoll. Two years of Beta Testing were enough to let us know that the bloggin' types pay a lot more attention to their ballots than the jaded, overworked sportswriters.

Furthermore, as far as we're concerned, the Harris Poll doesn't exist. And let's not even bring up coaches voting on other coaches except in the name of sporting satire.

If it's up to us, Brian's BlogPoll takes its giant leap forward in year three. Join the revolution, compadres.

6. We will mercilessly ridicule BlogPoll voters who fail to live up to the BlogPoll's ever-improving standards. Wack balloteers who fail to justify their opinions will be openly mocked. Or, pending Brian's approval, banished to Oxford to serve a one-year sentence as Ed Orgeron's translator. LEMMETAIFOOTBAWYAW!

7. We will tirelessly promote the work of Sunday Morning Quarterback until he is rightly crowned College Football Blog King. No explanation needed here. Right? Two chicks, at the same time: SMQ, the best in the non-business.

8. We will focus on the brutal facts of the matter. None of this nancy pants psycho-babble that's best reserved for Reader's Digest. You didn't lose because of some ghostly otherworldly spectre of "intimidation." You lost because your left tackle is not stronger and faster than the man he is facing. Readers are smart enough to accept this. If something silly like this is invoked, it will be in an admittedly silly fashion.

9. We will kneecap the weak-brained, starting with ourselves. And in the spirit of the rule, we'll admit our errors freely. Even proudly. (Because there will be plenty of them, especially for Orson, the Harry Caray of blogging re: accuracy.)

10. We will focus on what is interesting/fun, not on what is traditionally important/powerful. If Hawaii-Boise State is The game... so be it. There's a zillion games a weekend, not one. Find your bliss somewhere between DirectTV channels 305 and 360, because it's a universal slate now. You truly live in golden times, reader.

11. We will challenge the paradigms which govern mainstream football thought, starting with LD's "GameDay Recap." You're all on notice--especially you, um, ourselves.

12. We will never let "Did you play football?" end an argument. That. party. is. over. Surgeons don't cut off the wrong leg and then ask you if you went to med school. They write your lawyer a check for 3 million dollars and quietly slink away to practice medicine in Belize.

13. Unless we inexplicably decide to write a post on the NBA, Bill Simmons name will never appear on this site. We're as tired of the too-easy Simmons bashing as we are of the Simmons columns themselves. (Plus he doesn't give a shit about the game anyway, so fuck him in the ear. -O.)

14. We are not serious. If we are, disclaimers will appear. Tuberculosis has the job of being serious. That position is taken and tired.

15. We will limit our complete ad hominem hatred of a coach to one man and one man only. Orson drafts Bobby Bowden. Peter selects Bob Stoops. You may grab your own Free Parking pass on one and one coach only.

(Why make promises you can't keep... there is no way you cease the Phil Fulmer ad hominems... no way. --Stranko)

Oh, how we hate this man.

16. We couldn't care less about season-end awards. The Heisman Trophy is dead to us. Unless and until they put Kyle in charge, we're indifferent.

17. We are fans of the game, above all else. This is s'posed to be fun, y'hear? Those who try to ruin our sport will be brutalized. Amen.