The NCAA released their report on race in NCAA athletics this past week, citing statistics submitted by member institutions that the NCAA says were "robust enough to be meaningful" despite only 782 schools out of 1,054 member schools responding. According to the report, the total number of men's and women's basketball and football coaches increased by 76 percent over the past decade.

Nevertheless, the report sounded a note of brutal honesty in assessing the disparate numbers of black head coaches and assistant coaches in collegiate sport:

"Overall, if you look at the growth of student-athletes of color who are involved in NCAA athletics, the big takeaway from this report is that the growth is not being reflected in the numbers of individuals who are either choosing or receiving the opportunity to become assistant or head coaches, directors of athletics and senior woman administrators," (Charlotte Westerhaus, NCAA Diversity-type) said.

Charlie Strong, turned down for half the coaching jobs in the SEC, would agree. 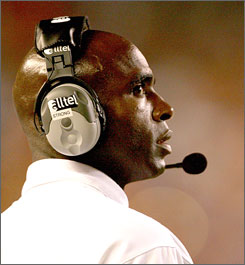 National championship defensive coordinator. 24 years experience. Someone give him a head job, please.