Ohio State, we knight you as an honorary member of the SEC:

The parents actually named their child after not one, but two Ohio State coaches, something so completely deranged we'll go ahead and accuse the attending medical staff at the hospital of negligence for not immediately testing the father for tertiary syphilis. We'll also predict that the child will take their first steps at age two, whereupon he will be tackled savagely by a helmetless Earl Everett. Honey, get down! Get down Tressel Hayes!

Aside from serving as an argument as to why couples with an aggregate age under 50 should NOT have children, the birth also served as the occasion for a whole array of strange incidents:

In the shape of Lloyd Carr's profile, oddly enough. Now for sale on EBay and currently holding steady at $16.95. Will increase in value over time, however, as child will only defecate in styrofoam coolers.

3. Baby grabbed doctor by surgical mask and punched him shortly after exiting the birth canal.

We at the Big Ten congratulate the Huffines baby. We realize that at just under six pounds, the child may be smaller than 10 pound, 7 ounce Urban Spurrier Hernandez, born in Miami yesterday via caesarean section to the Hernandez family of Hialeah, Florida.

We would like to say, however, that in the Big Ten we refuse to compromise the birth of our children with savage C-sections. We also encourage our mothers to eat healthy foods, unlike some people who drink corn syrup straight from the jar during their pregnancies in between drags on their Kool 100s. Finally, we would also like to note that on his birth, adorable little Tressel Hayes will be surrounded by a competent, trained, and caring medical staff, and not brought into the world by a drunken hack with an expired medical license from the Dominican Republic who just put down his bistec y queso sandwich before performing the procedure.

Again, we congratulate both families on their joyous births, even if one of them is doomed to a life of troglodyte obesity and an early death by stabbing in a botched drug deal. 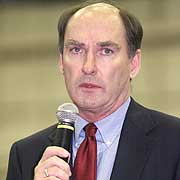