More spring practice gossip, this time from a highly desirable source: Da U of Miami, now under new management with Randy Shannon at the helm. Reader/citizen journo Redheaded Jewban gives us the insider's info as only scuttlebutt, rumor, and a guy he knows who works at a pizza shop can deliver:

I am a loyal gator in Miami, but I still think I should supply you and the EDSBS readership with an early Miami report.

New Head Coach Randy Shannon has a gag order on all things quarterback related, which he reiterated to the media during the last scrimmage in which he was pressed for information. To sum up the situation: Kyle Wright was one of the most highly prized recruits his senior year of high school, but has not produced much at Miami. Wright is a typical dropback passer, which would seem to fit well in Miami's pro-style offense. However, he has not done too well. This could be a combo of never having much time to pass or just being scared under pressure. 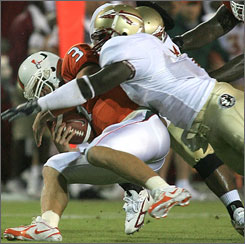 It's been like that for Kyle Wright at Miami.

Reasons he may win starting job: He looks great in the red "Don't touch me!" and basketball shorts zipping the ball around to all his reads and was the starter the past one and a half years until his midseason injury, which let his competition get time on the field. Kirby Freeman (white guy with a very black name) is another highly talented player for the Hurricrimes. He was considering transferring, but was convinced to stay and now has the 'U' tattooed on his shoulder blade.

His style of play is to look at his first read, and if it is not there, he's taking off. He is a pretty talented runner, but not on the level of Demons of the Past (Tommie Frazier, Charlie Ward). Reasons he may win the starting job: Wright hasn't shown much improvement over his time in Coral Gables and Freeman is entertaining to watch.

Although Shannon's gag order is on the media, it doesn't mean 18 to 22 year olds won't talk when its not a reporter asking the questions. A very close friend of mine works at a pizza shop right across from the Miami campus, and it is frequented by many a football player. He has info from someone knowledgeable of and close to the QB situation that although the job has not been nearly secured by either, Freeman is currently leading. I, nor my insider dough-tossing friend, can speak to how much he is leading or how close he is to being the official starter, just that he is ahead right now. Kirby--cooking up a starter's spot in Miami?

As for new coach Shannon, some other players have intimated that when nice-guy/old-man Coker would walk into a room or meeting, the players would still be chatting and finish their conversations. Now when coach Shannon walks into a room, everybody shuts up and all eyes are on him. During last week's scrimmage, highly touted WR Lance Leggett spiked the ball in celebration after a first down. Shannon asked the ref if that would be a penalty in a real game and the said yes. Shannon then instructed the ref to throw the flag and got in his players face. Miami is not historically a place for discipline, but things do change over time.

Miami freshman watch: Running Back Graig (yes, that is the correct spelling) Cooper has looked amazing. Described to me from some as a juke machine, he took an option pitch in practice and finished it 70 spectacular yards later in the endzone. He in combination with Edgerrin James young cousin, sophomore Javarris James, will be the main focus of the attack of new offensive coordinator, the Devil of October '94 himself, Patrick Nix.

There you are: Miami football players eat pizza, are running a bit of the option in practice, and are scared silent at the mere sight of Capitan Shannon. Oh, and Kirby's looking like he's about to swallow the competition whole. Thanks again to Redheaded Jewban for his fine work.

Send your own spring practice reports to harumphharumph@yahoo.com.