You might assume Smoothie Kings would have, at most, like seventy bucks in the whole place at any given time. You would be wrong: an approximate answer would be at least $463, the exact total tallied by Pat Lazear, a West Virginia signee and All-Met linebacker out of the Washington area who bravely decided to conduct some "amateur field economics research" by walking into a local Smoothie King, taking the money out of the register, and then leave to count it in the controlled scientific environment of his apartment with the assistance of four friends.

And which university stood up for the bold research methods of young Lazear?

That's right: West Fuckin' Virginia. (NT: Nupe in VA.) Lazear is on scholarship to West Virginia following the dust settling around his case. Lazear served ten days in jail, has a ten year suspended sentence, and has paid back the $463 he took as part of his settlement. According to West Virginia's Rich "I'm not going to coach Alabama, seriously, y'all" Rodriguez:

"We have talked to a number of people, and after a thorough review, I am reassured that Pat Lazear will be a successful student-athlete and a positive member of our university community. We are eager for him to join the Mountaineer family."

One person who cannot be happy about the commitment is Randy Moss, owner of Inta Juice, a fresh fruit juice and smoothie business in Morgantown, West Virginia. Should Lazear attempt to jack Moss' straight cash, homey, the response could truly be a disgusting display for the ages. 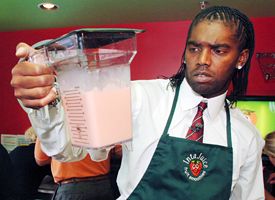 Moss: mess with the smoothies and die, Lazear.