Share All sharing options for: JACKED UP: FLORIDA FAN IN SURRIOUS TROUBLE FOR WEARING GATOR SHIRT

A kid in our middle school was once paddled by the gym teacher for telling him to "fuck off, drunk-o." The statement was factually accurate, of course; our middle school gym teacher really was a drop-dead alcoholic on the Nicholas Cage, Leaving Las Vegas-style scale, and succeeded in drinking himself into an early grave. If alcoholism were the Boston Marathon, he would be the Paul Tergat of his generation. There simply were no equals. Our coach, who could finish a case of beer in the time it took Paul Tergat to run 26.2 miles. Both champions.

Anyway, coach was fun--the evil kind of fun. He had a great speech he rolled off about three times a semester whenever we became dissrespektfool. It went as follows:

So after the coach had replaced his testicles

--which were in truly stereotypical fashion perpetually falling out of his BIKE brand shorts--he wailed the kid's ass for stating the obvious. (Picture this with flies approaching the coach's curly, greasy hair, and then falling dead to the ground from the fumes.) The kid then skipped away from the paddling, for which he got suspended because, in Coach Scotchblood's words, the event was "surrious."

It was one of the stupidest things we've ever seen with our own eyes, and the reason we believe we could enroll a panda in a tracksuit in a Masters' Program in Education and come back two years later and find a smiling graduate with a diploma in one semiarticulated paw, and a sprig of bamboo in the other. 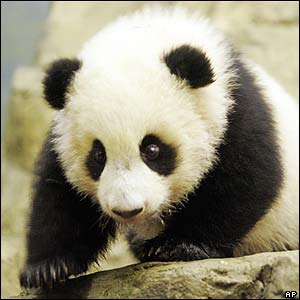 Proud holder of a masters' in education, which she ate on receipt.

It's good, then, for us to have the basest suspicions we have about the American education system reinforced by Osceola County Schools. A student at St. Cloud Middle school was asked to change shirts because, obviously showing signs of gang related activity, he chose to wear a Florida Gators shirt to school. From WFTV (HT: zillions of people who sent this to us):

Two Osceola County parents said their son was humiliated at school when he was suspected of wearing "gang-style" clothing. Saint Cloud Middle School said only a handful of students were searched last week when they got a complaint.

The parents told Eyewitness News, if their son was wearing low baggy pants or a bandana, by all means he should have been sent home, but he wasn't. He was wearing a Florida Gators t-shirt.

That's where it starts. First they start with doing pot. Then they start sniffing crack. Before you know it they're selling the wiring out of your house, wearing assless chaps, and dating manatees. And that's just the start.

Again: what are the qualifications for working in a public school? Is that a certificate program? Or just a two-week training? We'd weep for the future, but only for self-interested reasons: with Florida public education placing such an emphasis on dress code and other vital subjects, students' test scores and learning will surely suffer, which equals more academic non-qualifiers to Florida and larger classes for FSU and Miami.

Clamoring for better public education only because it could increase your football team's number of academic qualifiers? We know: it's totally and completely awesome. Go ahead and mail that Nobel to the EDSBS bunker, Stockholm. We'll be waiting.