The Knight Commission (creators of fine, sentient automobiles, too) has issued a scathing report scathing recruiting sites with scathing language about the ever-larger phenomenon of recruiting hoopla that will, we guarantee, be described by the press as...scathing. How scathing? Try to duck this shit, Tom Luginbill!

"The elite athletic prospect has become completely commoditized," said Edwards, and in the process the very top recruits have become "hedonistic, materialistic and individualistic."

Heavens! We might have even be commodified, and thus have a cash value to the universities. Mixing filthy lucre with collegiate athletics? Next you'll be suggesting we put the games on television. 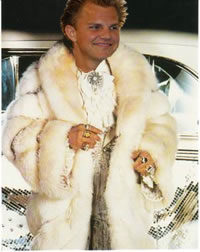 The last thing we'd want would be mixing money with collegiate athletics.

Because of their inner-city backgrounds, he said, some of these recruits are also gun-toting gang members. Edwards said it is only a matter of time before one of these spoiled recruits "goes off" in the athletics department because he is not treated the same after joining the team.

Finally, someone uncovers the ticking time bombs underneath our very noses: spoiled gang members. Because you only get spoiled in the last two years of high school. All that mayonnaise sandwich-eating, using the stove for heat, putting plastic sheeting over the window and having your bike stolen fifteen times in a year evaporates in the rush of a few magazine articles, a few hundred bucks slipped into the hand after the game at the Golden Corral. It makes it all good--too good, in fact.

Step three: football recruits gunning Tyra Banks down in the quad while Omar Epps screams at the heavens "WHYYYYYYYY RIVALS? WHY DID YOU HAVE TO GIVE HIM FOUR STARS."

We were going to finish up reading Temple Grandin's book Animals in Translation tonight, but that shit might have to wait. They don't let Unfrozen Caveman 1972 Sociologist loose in the media every day, you know.