1. Mascot: Ohio State. Less a pick for Brutus than against the nonexistent Wolverine. Michigan does not have a mascot, since "the Athletic Department has steadfastly maintained that such a symbol is unnecessary and undignified and would not properly reflect the spirit and values of Michigan athletics." Polly Prissypants agrees, by the way.

Mascots may be many, many things, but one thing they must not be is disturbing. And Brutus, despite years of tweaking and redesign, still looks less like a mascot and more like something from a Danish art film dream sequence.

Niels, you find him disturbing, no? Haunting your dreams, ja?

The unnaturally thin limbs. The head, part gangrenous brown, with a clot of mismatched features squished into the cream-colored center it calls a face. The BMX gloves, presumably worn so that Brutus won't leave fingerprints on his unsuspecting victims. The teeny hat that obviously been stapled to his head. It's all what the good folks at Deadspin call nightmare fuel of the highest degree.

Michigan, on the other hand, did actually have live mascots on the field once:

The quote says what you're thinking:

However, the animals grew larger and more ferocious, and as Yost states, "It was obvious that the Michigan mascots had designs on the Michigan men toting them, and those designs were by no means friendly."

Alas, by default we must pick Brutus.

Because he's got flow. Because he's serving up asskick salad left and right. Because despite singlehandedly trying to restore dignity to the sweatervest, he manages to steer his sex-bomb hovercraft into the garages of all the finest hoes in the greater C-bus area. Because he took on the Israeli mafia and came away alive and kicking.

Oh, and because he's 4-1 against Grumbles the Sea Captain. Let the abs do the talking, daddy. 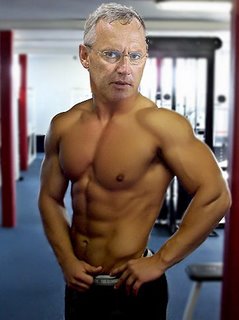 Ohio State's Tressel: been laying off the carbs for a while now.

Wolverines: "This is truly a beautiful animal, quick, silent, deadly, and determined to win."

Buckeye: "And while highly poisonous, buckeye seeds contain much protein and were used as a food source by Native Americans who boiled and leached them to remove their toxins."

4. General Aura: Ohio State. Their fans earn this by embracing their nasty reputation, setting things ablaze regardless of whether they're bleeding or not, and in fact beating up cripples. If you're going to be a tie a maiden to the railroad tracks, at least put on the Snidely Whiplash mustache to match, dammit--that's the rule Ohio State fans embrace, since they're the closest fan species America has to compare to the soccer hooligan. (Even Miami Hurricanes fans, while malicious and drunk, are so devoid of commitment that violence strains their anemic levels of devotion. We doubt they'd so much as slap a chicken in the name of Miami football, much less roll over a squad car and set it on fire.)

Oh, and there's the Horseshoe/Dot I/Hang On Sloopy thing, too, if you're into the sincere tradition thing. We'll be busy waiting for the sniff of pepper spray while watching urine flow down the staircases of local parking garages.

The Factor Six Factor Six: Ohio State. Because TCOAN has considered attending a Ph.D. program there, we might as well start lobbying the Buckeye faithful early on in order to avoid a boot party when we eventually attend a game there. They're at home! They've got Troy Smith! We love the smell of tear gas in the late afternoon! Any other excuse that covers making the politically expedient choice!