CHOW NOT GOING TO FSU. ASK KING BIRENDRA ABOUT IT.

Share All sharing options for: CHOW NOT GOING TO FSU. ASK KING BIRENDRA ABOUT IT.

We have five simple rules to life. They are based upon observation, experiment, and peer reviewed statements made in numerous bars across the world between the hours of seven p.m. and 4 a.m. They are:

1. Things will go wrong.
2. People never change, and never will.
3. People continue to make the same mistakes over and over again.
4. When your favorite uncle is eaten by a tiger, don't ask "Why?", ask "Why not?"
5. Attempt to ignore rules 1-4 at all times.

Given that, we bring up the rumor of Norm Chow, the Greatest College Offensive Coordinator Ever ™ and the currently a mediocre NFL OC for the talent-rupt Titans. This rumor comes to us courtesy of Horseface, who thinks a job-hungry Chow would find an ideal transitional job in the situation at Florida State. Chow comes in as an assistant, gives Bowden one last "dadgum,", and then takes over for Bowden when he leaves. 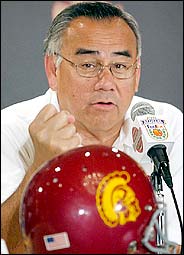 Chow wouldn't engage in Matt3576HorseyNeigh@yahoo.com's fevered scenario because it violates several of Orson's Sad But Reliable Rules for humanity. The indictment, point by point:

1. Something will go wrong. Chow's from the West Coast, and enjoyed his greatest success there. Why wouldn't he go back? Arizona State's football program will likely have an opening, and Oregon State and UCLA are also up there for potential jobs. All of these are more likely than Norm Chow to Tallahassee, where he'd be replacing a legend in an area of the country he's never really worked before.

2. People never change, and never will. Bowden won't admit mistakes, and has no reason to: in a single person, he represents the successful heritage of Florida State football. He's also got that history of rank nepotism, which won't change. Get Jeff Bowden a shiny new brass nameplate and fasten it into the door with the big screws, because his biggest resume line is never going away.

3. People continue to make the same mistakes over and over again. See number two. Jeff's just learning. He's young. The other boys turned out okay, except for the embezzler, right? Sick with dolor as Seminole fans are right now, we have to ask an even more sickening question: what makes anyone in the fanbase think that Bowden doesn't have fantasies of putting Jeffy in charge once he's gone? What in his behavior has shown an inclination that he wouldn't do this?

The second greatest coach of all time wins-wise (we refuse to count the Samford wins in that total, and just like JoePa better anyway, especially after his "Run For Two" earlier this year) becomes a laughing stock of a country sheriff by promoting his inept son to a position of responsibility. Why not? Why can't a formerly brilliant coach be completely anti-brilliant towards the end of his career? It happens all the time. Woody Hayes punches Charlie Bauman. Dennis Erickson goes from coaching Miami in the national championship to play-calling in an airplane hangar in Moscow, Idaho. Smart people do dumb things, like trust someone simply because they have half the same genes as they do. Ask King Birendra--not always the soundest thinking. Don't ask "Why would FSU make a bad decision on the next coach?" Instead, ask "Why not?"

King Birendra of Nepal: ask him how mixing family and upper management worked out.

Supplemental evidence: [NAME REDACTED]'s entire hiring and tenure. Why not?

5. Attempt to ignore rules 1-4 at all times. The only ray of hope here for Seminole fans: rules 1-4 collapse, and someone makes sound decisions in hiring the next coach. Of course, this implies betting on people being competent, which is a big, big risk. Perhaps we need a rule six...