The Narrative dies a little each week--long live the Narrative! The best part about a system where 10 teams per conference compete for a single spot comes in the knowledge that while you may not win, your most hated opponent's odds of winning remain steep and will likely explode in their face on national television.

This nearly happened as South Carolina almost beat Auburn 24-17, with only a clanking pair of traitorous hands keeping the Gamecocks from tying it up in the dying last seconds of the game. Brandon Cox was forced to convert 4th and 6 and 3rd and 21 in the third quarter to hold possession. The buzz line is that Auburn held the ball for the entire third quarter--astonishing, especially since Tuberville engineered the cock-free third quarter by going for an onside kick to get the ball back and eke out another Irons rushing touchdown.

The pressure of a road game had Al Borges saying...strange...things: From John Solomon's blog:

To say Auburn was relieved to prevail is an understatement. Al Borges spoke about "swallowing hard" if Tommy Tuberville hadn't made two gutsy calls - then Borges acknowledged they were "swallowing hard" anyway at the end.

The general thought among Auburn fans we spoke with was that Auburn's defense were the ones swallowing hard for most of the night, befuzzled by Spurrier's going to a spread formation and passing at will despite Auburn dropping eight men into coverage. (This paragraph truncated in order to prevent embarrassing Spurrier man-love spewing across the page. There's been quite enough of that.)

TCU lost last night, scrapping the TCU "BCS-buster" tag and the nation's longest win streak simultaneously. If there's a positive in all of this, it's the fact that our campaign to get jets installed in TCU mascot's eyes that spray red fluid may have just found some extra push, since we blame Super Frog's inability to intimidate opinions for TCU's loss. Thanks to Austin Murphy, we now know the red fluid is not blood, actually, but something even worse:

We'd spent the previous half hour killing time in the office of associate athletic director Scott Kull, who'd made several important points about the school's distinctive mascot. "The horned frog -- actually a spiny lizard -- subsists on a diet of red ants." It had long been believed that this creature was capable, when angered or frightened, of directing a four-foot stream of blood from its eyes. Kull tells me that's not blood, but rather, pre-digested red ants.

An animal so filled with rage it vomits through its eyes. That is a mascot. 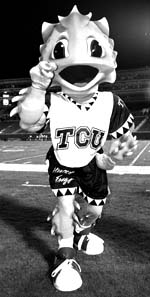 Kids, come say hi to SuperFrog...AIIIIGGGGHH GOD WHAT IS THIS!!!