Paleologists from the University of Texas have discovered a new and important missing link in the history of human evolution, a new subspecies identified as "Alabama Man," according to an announcement from the university released on Wednesday.

"Alabama Man represents an important link between the species we now call homo sapiens and our evolutionary past," said Dr. Peter Wu, an anthropologist and practicing medical doctor spearheaded the discovery and analysis of Alabama Man's remains.

Scientists were mum on details at a brief press conference in Austin on Wednesday afternoon. The paper has generated significant buzz in the scientific community, particularly among paleoanthropologists and archaeologists who are already taking a deep interest in what may be the first recorded and systematic attempts at what we call human culture.

Little is known about Alabama Man at this point, but scientists did have hypotheses to share about their new discovery.

--Alabama Man must have had a full command of the process of fermentation, a first for a subspecies of its type. "The bones of Alabama Man are in fact soaked with alcohol specifically carbon-typed as something very similar to what we would call whiskey. This and the remnants of bottles in the field site clued us into the unique alcoholic capabilities of the species," said Doctor Wu, "a powerful theme we can already note in the bone chemistry. If any of them lived past fifty I'd be shocked." --Alabama Man's bone analysis yielded another puzzling clue: abnormal bone thickness. Dr. Wu's assistant Jane Singer commented that "this girth in the bones was likely indicative of obesity, a shocking discovery in prehistoric man given the dire circumstances of their daily lives.

--Singer went on to make what will likely be the most shocking proposal of the day. "We believe Alabama Man could have in fact been raised and bred for food by other human species. The thick bones on their otherwise normal frame would imply a rich and well marbled flesh, making the average Alabama Man too slow of foot to escape predators easily. No other explanation suffices in such a harsh and unforgiving environment."

--Other clues support Singer's theory. Alabama Man's remains were surrounded by artifacts previously thought of as beyond the reach of Australopithecene man: the bottles of alcohol and evidence of intense and possibly fatal alcohol consumption, the remnants of lottery tickets, primitive cigarettes, dice made from deer bones, and fish hooks littered the site. "Like Peking Man, Alabama Man did not grasp the concept of throwing away garbage. When their cave filled up, they simply moved to a new one," said Singer.

--In addition to the bribes given by other human species, Alabama Man seemed to have some concept of religion, too. "There was insistent worship of an old man, as indicated by intricate wall paintings. We believe they conflated the old man with the bear, a cosmology we're still trying to grasp," said cultural anthropologist Sue Givens. "They may have worshipped the bear for its power, and the old man for actually making it past fifty." 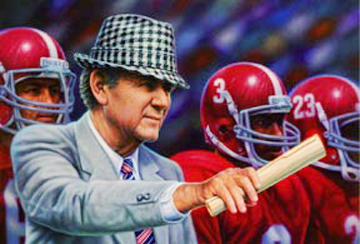 Science will publish the study on Monday. Dr. Wu and others stressed caution in taking the proposals of its study too far.

"We're dealing with bones that may be up to a year old here. Our complete specimen appears to have died a violent death, perhaps at the hands of a Tiger, the only local species who seemed to have a predatory monopoly on them," said Wu.