MEMO TO CHUCK AMATO: PROFESSIONAL ADVICE FROM HOW TO KEEP A TEAM TOGETHER

Share All sharing options for: MEMO TO CHUCK AMATO: PROFESSIONAL ADVICE FROM HOW TO KEEP A TEAM TOGETHER

Chuck Amato. Dan Hawkins. Larry Coker. Coaches whose teams stumble out of the gate face a steep challenge in keeping the lines of communication open, their team's attitude positive, and making sure they don't run to the media, stage player rebellions, and make unsubstantiated claims of sexual abuse on local sports talk shows.

With that, we surveyed a selection of communicators and leaders to ask what they would tell troubled head men in times of crisis.

"Tell 'em they'll be tough times, but that it'll make them--and you as a coach--better. You'll find out who your real friends are at times like that. You'll also find courage. Determination. A bottle of Johnny Walker in your desk. Pills. Yourself, waking up covered in blood in feathers somewhere south of Opelika. All of those things, actually."

Mahmoud Ahmadinejad, President of the Islamic Republic of Iran.

"I find that communication becomes key, even if you may feel like you're all alone. You must remain steadfast, but show the people around you that that steely determination does not come without a caring heart that senses and appreciates all of their concerns. Also, blame the evil, greedy claws of the greedy, fanged Jew for all that goes wrong. They love that."

"These guys seem fine to me. What those players need is some discipline. Yes, discipline."

"Lull them into a false sense of security, telling them that all is well. Distract them with your puny futile hitting games while we hover above, ready to pounce on your monkey scat of a planet. Kittens give me gas. Thank you." 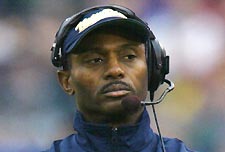 "I am hitting my tee shots further, and straighter than ever, which is making my second shots a LOT easier! In fact, I've even learned how to put a nice draw on the ball - something I could NEVER do before, at least not on purpose. Can you see why I am so excited about this???"

"Hell, start throwing cash around and cut the balls off a large animal. That scares the living shit out of people. Ain't nobody gettin' a ride off old Jack without gettin' a little grass, cash, or ass. That's how you get recruits to come to Starkville, son."

"Headbutt vending machines. It sends an exciting statement to your team that you're not going to take their lack of focus, and that you are excited and willing to take this out on a Fanta, Nehi, Coca-Cola, Pepsi, or even a Cheerwine-sponsored vending machine twice your size. Mind the older models, though, especially the glass-fronted ones. Then tell them you see improvement, and that you're getting better and better, even if you're not. Did you know I can barefoot waterski? Did ya?" "Stress can cloud your thinking. Some simple techniques can help you regain your poise and composure as a leader. Taking a quiet moment to appreciate the gleam of sunlight off your 724 carat diamond ring, for example, sharpens the mind like nothing else. Or drinking a refreshing cup of tea from a dissident's finely polished skull, while enjoying his liver spread across melba toast. Or sitting on broad veranda for an instant, appreciating the undulations of the Ubangi river as your henchmen drop prisoners into it from a helicopter several hundred feet above you. My personal "safe place" is when I'm in in first class with my pants around my ankles, passed out with a bottle of Dom Perignon in hand after sodomizing a stewardess in front of a horrified cabin of my frightened underlings. All these things for the troubled coach I recommend."