Share All sharing options for: A UF-UT PREVIEW IN TWELVE MINUTES--GO!

We've got 12 minutes to post this bit on Florida/Tenneseee, and dammit we haven't even started. So rather than spending too much time--damn making all those jokes about Wolverines filling out online dating surveys--on making it and then waking up to find us still behind the computer at 8, we'll type this post in exactly 12 minutes.

(This also allays the fact that this game gives us the screaming fantods/bloody shits/ serious gastric torsion/other horrid signs of anxiety. As much as we love it, we hate what this game does to our soul. So does our lawyer, who cleans up the mess the following morning with the help of the local bail bondsman of our choice.) 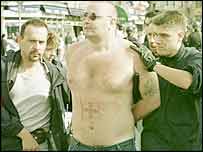 Okay, so: signs of the Footballpocalypse that will determine this game.

Plague. Or "plagued," as in with inconsistency. Tennessee's flaky-ass defense. Kills California stone dead and then gives up almost 300 on the ground to Air Force. Also playing with one-armed Justin Harrell, who Meyer thinks is as good with one arm as most players are with two. Perhaps they only show up for obvious threats, in which case we really hope they focused on the game tape from Alabama 2005. That's what you should prepare for--we promise.

Florida's offense, though has to be plagued with doubt over showing up in a big game. Iowa's no pushover, but even in that game the rushing attack never seriously materialized while the scoring capitalized off the heavy lifting done by the special teams and defense. Winning the game with scoring against Tennessee in their home stadium would constitute an evolutionary leap for this offense. (Cue Chris Leak "Fulfillment of Frustration" theme...probably something emo-ish, maybe lifted straight off The O.C.)

Return of the Antichrist: Erik Ainge, who must be possessed by some important non-deific but approximate spirit at this point. Ainge has risen from the dead of being slammed to the goalposts and throwing a pick for six on the same play last year to throwing precise sixty yard handoffs to streaking receivers this year. Zombie Ainge must be crushed by Florida in one manner or another, be it via a standout performance by a line that has thus far underachieved or through judicious blitzing. And Florida's defenders already know the secret ot zombie hunting: aim for the head.

Aim for the head. Both defenses will this weekend.

Number (s) of the beast (s) : 66 and 75, the numbers of David Ligon and Anthony Parker, the guards for the Vols who'll match up against bush-hog Marcus Thomas on the Line. Thomas can disrupt from the tackle spot on pass plays as few have in recent Florida history and is also one of those barometer guys who infect the whole team with their attitude. If he and Reggie Nelson eat, everyone gets full. If they don't, Cutcliffe may run his power game and push-me/pull-you seesaw passing game all night with little interference.

Mascot advantage: Florida. Alligator versus bluetick hound? Snap, roll, and over in a scene that would make a coon-hunter wail with sorrow. Then again, at least Tennessee can have a loving, caring relationship with its mascot. No matter what we do, ours will attempt to kill us or run away for fear of being turned into cowboy boots and batter-fried nuggets.

And a great battle shall commence... Oh, Jesus we don't want to think about this. We just punched the s off the keyboard doing that. See what you made us do? (Grabs paper bag, hyperventilates.)

False prophecies God I want to win this game by eighty. But that's not happening: Fulmerball means big, well-conditioned hogs attempting to pigrush their way down the field on offense and slamming gut to gut tenacity on defense. They'll beat Chris Leak up a little, stop the run, and get fooled on a couple of trickish plays since while they play big and fast, they don't always play smart.

Florida's defense will also stop the run, but has been vulnerable to the quick snap passes lately, something both Iowa and Southern Miss exploited. (Iowa, with a bit more success, obviously.) Ainge will be getting the ball out fast and often, negating the line's speed. Both offenses will have to score through the air, which means picks and big defensive plays, too. Special teams is a push.

Given that, we'll be contrarian. One storyline here is a fake: Urban renewal, or Vol revival. We think there's enough flake left in Erik Ainge to shake loose a few picks, especially since he's been cruising along. Leak, though, gets no tomorrow as a senior, and has been making outstanding decisions with the ball. He won't be the one to lose it for Florida.

Last year we picked the Gators to lose, and they won 16-7. Being superstitious, we'll pick them to lose this year, too, by a score of 23-13, with Ainge getting some glory with his bigass receivers. If we're not thinking clearly, blame the blurred vision on the miasma of hate we're already stumbling into entering gameday. Rational thought is simply not an option in this rivalry--why start now?