INSIDE SCOOP: DUKE CANCELS FOOTBALL SEASON DUE TO LACK OF SCANDAL

Share All sharing options for: INSIDE SCOOP: DUKE CANCELS FOOTBALL SEASON DUE TO LACK OF SCANDAL

Though we're pretty sure he's either prepping to trot around the Continent or is already doing so, Jonathan Tu gives us the inside scoop on another preppie school and its recently tumultuous relationship with athletics: Duke.

Durham, North Carolina - In response to the absence of serious administrative malfeasance of any kind, as well as a considerable dearth of legal woes including charges of sexual assault, Duke University president Richard Brodhead announced yesterday that the football teams season would be cancelled. 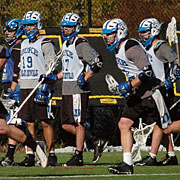 It's hard to compete sometimes.