We missed this last week, likely while we were too cursing the entire nation of Italy or trying to resurrect our two-cylinder server from the onslaught of UP TO FIVE PEOPLE AT A TIME TRYING TO DOWNLOAD SOMETHING AT ONCE!!!--the University of North Dakota are suing the NCAA for their attempts to ban the "hostile or abusive" nickname "Fightin' Sioux."

The letter reads like the response in what could be an all-timer in terms of geek quotient in dorkfighting between a university prez and the NCAA. In fact, there's so much quality bitchcraft in the letter, so much sheer debate club slappery that we can only sample the premium bits. We present excerpts interlaced with our commentary and translation.

I have chosen to communicate with you in this way for several reasons. Since you have had what you say is the final word on the issue of our nickname and logo, we must now consider legal action.

Translation: Final, my ass. Taste the blade of my lawyer, Myles Bitch.

Despite some of the hard-edged language I have had to use in this letter, I bear no animosity toward any of the NCAA committee members or staff, who, I am certain, are all good people.

Translation: I hate every last one of you from the oily, filthy tops of your heads to the useless, pampered soles of your feet.

Self-righteousness has wreaked havoc in the guise of good throughout history.

Translation: You're Hitler. This a classic old debate trick, where you take your opponent, who might be arguing for term limits, take the flimsiest thread of connection, and connect it to Hitler. For example: "My opponent says gravity's been a positive influence on human history. Well I would remind my audience that were it not for gravity, Hitler would have drifted off into space, and the Holocaust would never have happened. Love gravity, and you love Hitler." 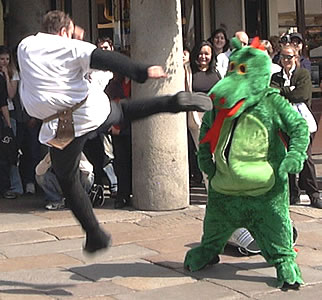 Myles--pictured here as green dinosaur--gets a boot to the head from UND's prez.