Share All sharing options for: TOM HAMMOND: SCARY AS HELL

This weekend, we were reminded of why we live in the greatest country in the world during NBC's otherwise wretched broadcast of the Kentucky Derby.

Wait, wait--let's not let that sink to the bottom just yet. When it comes to sports, NBC may be the nadir of sports broadcasting in the modern age. Jefferson Pilot whips their ass on a tenth of the budget they work on, and that's with all the cheesy Golden Flake and Yella Wood ads worked hamhandedly into the show. Their video standard looks cheap, the broadcasters' heads dominate the screen like rotten melons in a fishbowl, and they used the same queso-riffic interest stories ESPN used without bothering to find a third. Sorry, viewer, there were only two interesting people associated with this event. Apologies. An atrocity, right down to the microphones taking up a third of the screen like it was 1958.

And Notre Dame fans...we forgot just how scary Tom Hammond could be. What makes him so pants-wettingly frightening to look at? He's not ugly, exactly; just unnerving. Maybe it's the unusually wet lips and rosy-cheeked face combined with the gray hair, or the stentorian voice emerging from a man who looks like one of your butcher aunties. Whatever it is, Hammond is creepy to look at on television, and likely scares the poop out of small children on sight. In close up, we were torn between two "separated-at-births." Perhaps it's more a matter of addition: 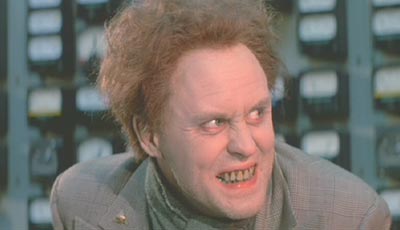 John Lithgow from Buckaroo Banzai, and... 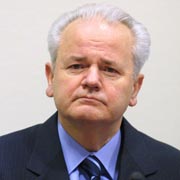 Slobodan Milosevic and this =

Despite Hammond's soul-quivering visage and NBC's complete $9.98 Big Lots special they ran on the Derby, there was something worth seeing on Saturday.

We think it was Andre Bazin who said that in every film there were five minutes of absolute beauty, regardless of whether the film-maker was trying to make them or not. That came to mind watching the fleeting magic moment on Saturday when, during a camera review of "Millionaire's Row," NBC caught the following image: Ludacris, Billy Gibbons of ZZ Top, and an embalmed-looking Smokey Robinson standing in a luxury box singing "My Old Kentucky Home" together. How these three landed in the same milieu, we'll never begin to know; but each represented to the fullest at the Derby, Ludacris in a white suit with a gold pin in his tie, Billy Gibbons in a suit and hat with acres of beard spread in front of him, and Smokey Robinson still wearing the same pastel sweater and white slacks he sported in the "One Heartbeat" video in 1987.

That these three are rolling on Millionaire's Row at Churchill Downs is proof not only that God exists, but that he is American, black, and fond of irony. For more on what actually happened at the race, check out Kanu's blog, Dodgy at Best.