Share All sharing options for: NCAA 2007: GOD IN A BOX

When we open it, should we cover our eyes to avoid melting our faces off at the unbearable sight of its pure majesty? NCAA 2007 is coming, and IGN has a preview of an early version of the 360 version of Infinite Jest for the Football Set. (HT: Kyle, who we didn't credit in the first edit of the post.) The early feelers are formidable:

--Living environment: fans that gasp and Gator Chomp/Seminole Racist War Chant along with the fight songs, in addition to standing up in anticipation of a player scoring.

--A new momentum meter, which means Cuddles Swindle's strategy of strangling us in 28-10 option slugfests could be a thing of the past if we launch a few long bombs in the first quarter for scores.

--The "Breaston Mod," or in other words revising impact players who don't measure up over the first 3-4 games of a season down to mere mortal status.

--The most accurate rendering you can get of a stadium without looking at the blueprints.

--Hopefully, the continued use of the phrase "He reached in and got himself a big sack," which still makes us titter every time Herbstreit says it. 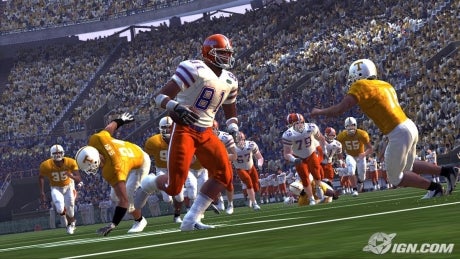 But do Tennessee fans lay down the instant they get down by ten in the game?