After a year of steadily weaker lattes and double cappucinos, Urban Meyer has had it with local Starbucks' barista and UF graduate student Derek Woolsey.

"It's time for Derek to nut up and show he's a part of the Gator Nation. It's time for him to show up and do his job. If I have to to, I'll go to the Speedy Mart for a buck's worth of brown swill rather than put up with the garbage I'm drinking now," Meyer said from his car Thursday morning, sipping a cinnamon mocha double latte he described as "sex-in-a-canoe weak." 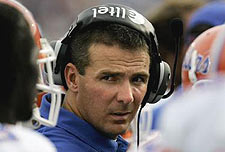 Demands quality from his baristas.

Meyer put the cup down with a look of disgust. "Maybe when Kelly's the manager and ordering him around at the Oaks Mall location Derek will get it, too."

Derek, a second-year graduate student in public health, has been serving Meyer's lattes on the early morning shift since the coach's arrival in Gainesville last year.

When reached for comment, Derek said he wasn't surprised by the comments.

"Yeah, he complained the other morning about his cinnamon double mocha. He's right, too; I haven't been feeling it lately, what with all the papers and analyses I've been cranking out. I'm just burned out, and haven't really been focusing all that much recently. I gave some girl who was caffeine intolerant a double leaded the other day on accident and we had to pay the dry cleaning bill when she shit her pants in the car. I'm pretty sure I'm getting fired as soon as they hire someone else," Derek said while topping a Frappucino at the 34th St. location lackadaiscally with caramel syrup.

Meyer, however, wasn't buying it.

"It's about more than that. It's about team. It's about pride. I know Derek has potential but all he does now is hold up the green apron. It's time he earned that free pound of coffee he gets as a Starbucks' employee. It's time he earns his own respect. It's time to make me a kick ass double latte so that I can lead the Gator Nation to an SEC championship."

Whether Derek responds through the spring practice season remains to be seen. Fellow co-worker Dave Akins, for one, is not optimistic.

"Derek hasn't been the same since he came back from the DRC last year, at least not at work. I think he's got worms, or malaria or Ebola or something, because now he just comes in completely dragass and muddles around before clocking out and going to school. He doesn't even hurry for Meyer, which makes me worry Urb's gonna choke him when he's slow with the java. I like him, but I'd totally fire his ass if I were Susan." Akins says Meyer typically paces, drums his fingers on the counter, and twitches while Derek takes five, six, or even sometimes seven minutes to prepare the Gator coach's coffee drink, often forgetting to say "thank you" or include a lid.

Susan Guiterrez, a 37-year old lesbian who runs the Starbucks, knows Derek is a problem, and says management is working to motivate the recalcitrant, unresponsive barista.

"We're working to rectify the problem," says Guiterrez, "and hope to keep Coach Meyer and the rest of the Gator Nation coming to the 34th St. Starbucks for their satisfying caffeine fix!"

Woolsey, for one, says any solution would be a short-term fix at best.

"Yeah, maybe I'll add the correct amount of beans, but come on, who gives a fuck? Most people don't even notice, provided you slap enough whipped cream and syrup on that shit. I don't care if it's the Pope--if I'm not feeling it, you're probably getting a shittily made drink. I've got student loans and some kind of gutfunk I picked up in Brazzaville, so don't talk to me about problems."

"I'll just go work at Maude's or something until I get my law school letters back anyway."

Meyer, after finishing Derek's latest watery concoction, refused to take no for an answer. "Derek's just one man. If he does his job, we'll go places. Until then he's got to earn it like a man. How? By making me a fucking championship cappucino, that's how," Meyer said from his office before slamming down his phone and going to work.