Share All sharing options for: AWARD TOUR: COACHES HIT THE ROAD WITH COACHES

The offseason does provide a kind of Marvel Special Series for fans: the meetings and visits coaching staffs set up with each other during the offseason to pick brains, share ideas, and generally make sure they're not totally out of the loop with the way most everyone else is playing the game around the country. When else do you get Bill Bellichick stopping by the University of Florida to swap notes with Urban Meyer? We obtained an excerpt of their conversation, and believe us, it's a riveting exchange between two intense coaches.

Bellichick: Pretty grizzled. But try not to look like you're passing an ass-boulder so much. Think "determined and unsatisfied," not "gotta lay off the cheese for a week or two."

Urban: Okay, okay. (Looks down, shakes head.) Lemme lay this one on you. (Makes pissed-off face while pointing heroically at horizon.) 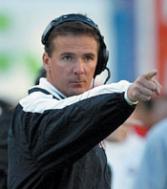 Urban: (Stunned.) That's why they pay you the big bucks, man. Wow. Could you go stare at my tailbacks for a few minutes?

West Virginia's staff was in town this week, too, but we're guessing the Mountaineers' contingent didn't include WVU head coach Rich Rodriguez, since we didn't pick up any wire stories about Gainesville residents begging Rodriguez to move his mighty head and bring back the sun.

Who knew "coachrod.com" wasn't a pornsite?