Share All sharing options for: DEE WEBB HAS HIS RICK JAMES MOMENT

Florida very nearly makes its own entrance in the Fulmer Cup sweepstakes with the story of Dee Webb, Florida cornerback now bound for the NFL, and his bunker full of weapons at The Cambridge Apartments in Gainesville. Gainesville police responded to a call from the complex saying that a bullet had traveled through a tenant's apartment and...well, that's not really supposed to happen, EVER, which is why you dial 911 and call the cops while crouching beneath your coffee table.

Police then followed witness reports that Webb had been walking around with a gun case with friends to Webb's apartment, known from here on out as THE SOVEREIGN REPUBLIC OF DEE: 750 SQUARE FEET OF FREEDOM! Delightfully flat prose follows:

When police arrived, they discovered a shell casing behind Webb's apartment, Kameg said. They also looked through the apartment's open rear sliding glass door and spotted an AR-15 rifle on the living room floor.

Webb's girlfriend, who was in the shower at the time the shots were fired, says she wasn't worried because she assumed it was Webb firing his guns. Considering what we know about the size of most Gainesville apartment complexes, this strikes us as neither normal nor safe, but Dee evidently had a habit of doing this which she considered not only tolerable, but perhaps desirable in a mate. Police arrive on the scene, and Dee's Rick James moment gets better when his girlfriend gets a hold of him on the phone and he's told to return to THE SOVEREIGN REPUBLIC OF DEE:

"He told us he was going to be a millionaire soon," Kameg said a report about the incident stated. "He kept telling us he had a million-dollar career waiting for him in the NFL and his lawyers would clear him of this."

The article goes on to mention that not only did Webb have an AR-15 and an AK-47 in the house, he also had a Mossberg shotgun and a loaded .38 in his car.

What happened here? We have a hypothetical: Webb is a gun nut--perfectly legal, as the article goes to great lengths to mention. Webb also likes to drink with friends, which is also perfectly legal as he's over 21. He also likes to show friends, who have also been drinking, his G-Unit-worthy arms cache, which is combining two perfectly legal things that together are NOT cool. (We know this from personal experience, which also indicates to the public that we spent at least part of our youth in Tennessee.) After a football banquet, the boys crack out the AR-15 and start fiddling a bit. One idiot--probably not Webb, since we can't imagine anyone who's actually shot an assault rifle doing this--points it at an adjoining apartment and mockingly acts as if he's going to take a shot...which he inadvertently does. Thus the AR-15 gets dropped to the ground, everyone drunkenly scatters to the winds, and Webb's girlfriend is left to answer all the questions with wet hair (Happy Valentine's!) and track him down to return to the apartment and explain how in the hell someone discharged an assault rifle in an apartment complex made of happy thoughts and cheap drywall (which describes all G-ville apartments.)

In positive news, we're now praying for Dee to be drafted by the Tennessee Titans and play alongside Adam "Pac-Man" Jones, another notorious bon vivant, or for Dee to receive an invitation to hunt with our Vice President, another strapped gangsta known for discharging his weapon at inopportune moments. This also gives us a chance to see the as-of-yet untested wrath of Urban Meyer, who players said had scared everyone so badly that "no one wants to see what it's like." With Bubba Caldwell and Reggie Lewis hanging out with heavily armed NFL draft picks, he's got his first shot. 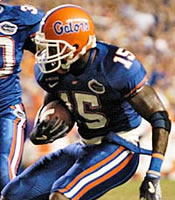 We ridin 'round with guns the size of Lil Bow Wow
What you know about AK's and AR 15's?
Equipped with night vision, shell catchers and infra beams, huh