Share All sharing options for: MEYER V. WEIS, PART ONE: I GOTTA MAN

Before the '05 season, Blue-Gray Sky and EDSBS did a little bit of soul-healing comparison between Urban Meyer, who spurned Notre Dame for Florida sunshine, and Charlie Weis, who took ultimately took the job in South Bend. Find both pieces heeyah and heeeyah for your perusal, but basically we both ended up saying pretty much what you would expect loyal, blood-raging college football fans of a particular team to say: I gotta man.

Revisiting the issue, though, we have to say that little's changed. Weis made far more out of the Irish than any thought, but unless you filled your expectations with the bubbliest of heliums--effervescent hype--Meyer did with the Gators about what most expected, though not without surprises of both the nasty and pleasant variety. After 12 games, including bitter rivalry games, losses to conference nonentities previously overlooked, and tightly contested bowl games, we review the Fat Man and the Pointer, two coaches who should be tied together for the remainder of their coaching careers.

W/L: Both 9-3, though if you believe in upward trends, Meyer gets the slightest of upper hands for winning the bowl game AND humiliating eventual ACC champions FSU and beating Iowa in the bowl game. Iowa's not exactly Ohio State, though, a team who nearly crapped in the cheerios of Texas' dream season. Could be a push, but we'll play our homer card and give Meyer the marginal edge with the bowl game win.

Fashion: Meyer didn't stray far from the khakis and golf shirt uniform, so much so that we imagine him opening his closet a la Bugs Bunny and selecting one from a rack full of identical, pressed, matching outfits.

Weis, on the other hand, utlized the full range of Adidas couture options to dazzling effect:

Intro...stunner with the blue tie ND nod and nattily cut suit that definitely looked anything but "straight off the big and tall rack..."

...and dove straight into late summer/fall with the suave golf shirt khakis combo...

...before getting down to work in a no-nonsense windbreaker/turtleneck ensemble that says to the world: I'm a coach, I'm confident, I'm sexy, and I'm taking this job by storm! 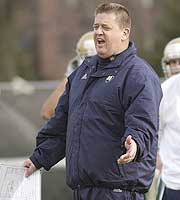 Hey! What happened to the planeloads of kinky cheerleaders?

The lone disappointment for Charlie, fashion-wise at least, came in the absence of his finest, most daring outfit, the "just returned to Tattoine to slash Jabba's fat ass" Jedi master hood look from his days on the Patriots' staff:

You will take me to see Fulmer.

Attitude: In measuring pitch, both did wonders in reforming and remolding formerly shapeless teams known for brain-farting at very inopportune moments. Weis' team's M.O. was "nasty," a word that got him into some degree of trouble with daintier alums, but the offense at least got what he was talking about, taking USC to the wire in a blow-by-blow battle they wouldn't see the likes of again until the Fresno State game. They passed at will, ran when they had to, and otherwise pulled the kind of kung-fu shell game that ran the Pats to seventeen straight Super Bowls with Weis as OC.

(Sorry, been re-reading a bit of Bill Simmons over the weekend. It was more like three out of four at one point. Actually, Simmons used to kvetch about Weis' playcalling like a nattering old schoolmarm, claiming that Weis would often make bizarro calls strictly for the joy of making said bizarro call. As someone whose football mentor would often go for it on 4th down deep in their own territory while shaking an angry fist at the raging heavens, we say: if it hurts too much to watch, we've got some Midol for you. And with that, we've discharged ourselves of our minor blogger's duty to slag on Bill Simmons for the day. Thank you, and good night!)

The defense...well, Tom Zbikowski couldn't play all eleven positions, though we bet he could run a ten man cover 1 by himself respectably.

Meyer had a similar effect on the offense and defense--at least in attitude--though his work was definitely an evolution over the season. The American Gladiators-style training camp helped, and players went past the limits of satire in their attempts to out-tough each other on the field. Winners? Dallas Baker played with a punctured lung at one point, and it's that kind of complete self-regard for both yourself and the laws of physiology that reflected the Meyer ethos, also seen in Reggie Nelson's tendency to fly into plays at the last second and knock whole years of schooling out of the brains of opposing wideouts, as he did to TimMohammed "The Prophet" Massaquoi in the UGA game. (Nelson was stoned to death by a mob following the game, so Allah was appeased.)

Is the POW! redundant here? We think so.

This is something guys didn't do during the Ron Zook era, unless you count Channing Crowder, who really shouldn't count at all since he did this on and off the field. (Channing Crowder will be a lifetime member in the FnDC Hall of Fame, mark our words.)

We call a push here.

Offense: No thought needed: huge advantage, Weis. Meyer's squad flumbled around in a sludgy echo of the spread option for half the season before humiliations at Alabama and LSU forced adjustments. Even then the Gator offense rolled just up to the level of competent, and did not dominate a single game this season (unless you count Vandy, but we'd rather not.)

Weis turned Brady Quinn into a warlock who made Jeff Samardzija levitate above his perceived talent level for the entire stretch of the Irish's schedule. Their offense rang up large sums against OSU, USC, Michigan, Tennessee...name it, and they did it, short of completely making up for the lack of chutzpah on the defensive side of the ball. They rolled a twenty every time they threw the dice and beat your force block with a wicked fireball spell when you least expected it. Dungeon Master Weis wins handily here.

Defense: The Irish defense did improve under Weis: they frustrated USC (which means keeping them under fifty,) and held up well against a diverse set of offensive foes in Navy, Michigan, Tennessee, and Purdue. They didn't fare well against spread offenses, however, and played dodgeball against Michigan State and Ohio State, with the latter matchup setting off grumbles about the "s" word and the Irish roster among ND fans. (Speed, which in ND fan code can mean "more black players.")

Florida's defense all but won games by itself this year, allowing for the Gators to play breathless submission matches with opponents. Meyer brought in stodgy Greg Mattison to balance out Charlie Strong's blitz-giddiness, and as a result the Gators had an aggressive d-line for the first time in four years. The linebackers got evil, too, with Brandon Siler and Earl Everett being given even greater freedom to sit in space and make tackles. The secondary was a season-long weakness--we can still see Kyle Jackson flailing on a play-fake and gamely sprinting after Tyrone Prothro in Tuscaloosa--but injuries had much to do with that, and once Reggie Nelson saw significant playing time they played like a different unit.

Results? 7th in the nation, just behind Texas in total defense.