HOW IT GOES DOWN: TOP RECRUITERS AND THEIR ROLE MODELS

Share All sharing options for: HOW IT GOES DOWN: TOP RECRUITERS AND THEIR ROLE MODELS

Feldman's got his piece on the top ten closers in the recruiting game today(subscription required), a list littered with names one expects to see when you're talking about convincing high schoolers that they are, in fact, God's chosen axis for the universe to revolve around. Stoops, Meyer, Bowden, Paterno...they've all got their own flavor and manner, their own attitude they bring to the interaction. While we won't steal money from the Worldwide Leader--we know they need to recoup the losses on Mario Lopez's $15/hr contract for ESPN: Hollywood (hey, plus benefits!)--we thought we'd make our best guesses as to the tricks of the trade, presented here through the onstage correlative each coach best matches in the world of entertainment.

Closing schpiel most resembles.......an AC/DC concert. Cannons. Thunder. Urban in a schoolboy's outfit bursts through the door and lays down the pitch in time to a pounding, lumbering beat. Points and fireworks explode behind him, setting the neighbor's shrubs on fire in the process. "All the better to rock to," says Urban, who commands those about to rock to salute him. A ten minute drum solo commences, and Urban pumps his fist and bangs his head in the face of the recruit's parents until the mother flashes her breasts and the father submits to a jailhouse tattooing of "Meyer" on his chest. The stunned recruit stands up, puts on a "Ballbreaker Tour '99 shirt," and marches out the door as Meyer points toward the horizon triumphantly to the boom of a cannonade's salute. 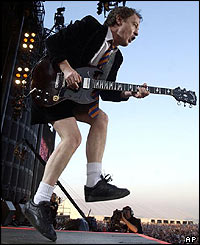 Closing schpiel most represents......a dinner scene from Patton. (Full disclosure: we're basing this on real-life experience, since we met Stoops and he was one of the most full-bore, type-A, gut you for looking askance at him people we've ever met.)

Stoops takes his seat at the table and dines with flawless manners. Regales parents with tales of Pelopponesian War tactics while simultaneously carrying on conversation with LB recruit regarding blocking techniques and the Wu-Tang Clan's fading influence in modern hip-hop. He comments that the '54 Chateau Latour he brought matches even the plebeian fare of the table they dine at perfectly, and then comes to a grave, dramatic pause. The table falls silent.

Stoops looks the parents dead in the eyes and proclaims: "Your son is the best football player I've seen since Bronco Nagurski."

Stoops: "Precisely. I know this is true, because I was Knute Rockne."

Closing schpiel most closely resembles......God, sitting in your living room in a sweatjacket. Not like a Charleton Heston, flowing bearded "God-Man" sort of figure...no, more like George Burns from the Oh God movies, sitting comfortably with a glass of scotch in his hands talking about the best way to grow tomatoes with Mom while Dad tries to figure out a way to ask God a question without totally sounding like a simpering fanboy. On his part, God seems nonplussed by the whole situation.

Paterno (God): Eh, uh, it's late kid. Wanna play some football for me? It's fun, you know.

Paterno: Not so much of a big deal, kid. So how 'bout it?

Paterno: Taking that as a yes. We'll see you in camp. Where'd I put the keys to the Town Car...

Closing Schpiel most resembles......a hyperkinetic, feel-good New Age pitch merging the mesmerism of a Flaming Lips video and a well-constructed Sportscenter segment. Pete enters, hugs Mom just a bit too long, and gives the one hand for the shake, one hand for the half-hug for Dad. Just "raps" with the "kid" for a while, wanting to know "what's going down" with him before moving on to the dizzying pitch. The pitch is a multimedia sensation, presented with the assistance of a ten-person crew who appears from nowhere with an army of video screens, stereo equipment, men in animal suits, a theramin, stagehands throwing flowers and confetti, and five USC Song Girls who take turns approaching the recruit, stroking his cheek with their delicate hands, and merely saying "USC" with the enthusiasm of Miss Kittin saying "Frank Sinatra," walking away seductively to sit on the furniture and stare at nothing in particular. Cross an old Calvin Klein Obsession ad with a Sportscenter segment and you'll get the picture. By the time it's over, everyone has changed clothes twice, and Pete is wearing a white suit with a Hawaiian shirt, backed up by Song Girls wearing wings and two men in rabbit suits labeled "Leinart" and "Bush." The dazed recruit has no choice, and follows Pete's beatific smile as he nods yes over and over again, holding a bottle of champagne in his hand that he didn't even drink.

Do you realize Pete Carroll is in your house?

Closing schpiel most resembles... John Travolta attempting to get Debra Winger in the truck in Urban Cowboy. Does not knock. Enters living room, points at the car, and insists: Get in the truck. Now.

Closing schpiel most resembles... Unimaginable shock and awe. Orgeron's footsteps shake rafters from miles away. A smell of burning meat and sulfur fills the room. The roof groans and peels back like the lid of a sardine tin as the beady-eyed, tight-lipped visage of the Orgeron peers in like a recruiting, glad-handing Grendel of the bayou. No words are exchanged; the hypnotic gaze of the Orgeron fixes the recruit to the sofa like the stare of a basilisk, and the parents, concerned more for their own safety now and all but acknowledging the inevitable, back away from their blue-chip offspring. A huge, calloused hand appears over the rim of the house, and the recruit goes limp as the Orgeron places him in a wriggling canvas sack on his back. The sound of giant footsteps recedes, and as the sun breaks through the clouds only the creaking of the house's roof settling back on its foundations and the distant scream "WILD BOYZ!!!" break the aftermath of...the Orgeron.