Ivan Maisel's always gotten a pass from us because he took a Stanford education and a law degree, thought for three seconds or so, and became a college football writer instead. The Three-Point Stance must be the easiest write in all of the college world, though, since it's basically three two to three sentence paragraphs Maisel has to crank out two or three times a week containing his quick hit thoughts on the game.

What separates Maisel is being "good," as in "not Peter Kerasotis-esque." Actually, one teeny spoonful of Maisel contains the nutrition of eight Mike Bianchi columns, and that's before editing. Going back and reading Maisel's archives, it's plain to see that Ivan's a guy with a panopticon eye for the game, an archivist's sense of history, and a fondness for the underappreciated and quirky characters of the college gridiron. (Who else was bullish on Tulsa senior wideout Garrett Mills during the season? Not us, for damn sure.) Maisel has also done something that made him as close to a working mainstream blogger as we can imagine: he wrote that one of his pieces just flat "sucked," and that he wished he hadn't written it. Get the man on WordPress now!

It's the offseason--here's a picture of Ivan Maisel.

Maisel, too, is an admitted homeboy for the Southeastern Conference, which makes last Friday's edition of the 3-Point Stance all the more refreshing since he leads off by recapping the SEC's dismal 7-9 record against BCS conferences (and the Elves of Notre Dame, forever sailing off to their own kingdom across the waters.) The Big 12, which we were daft enough to call a "soft" conference in an early bit of online retardation, went 8-5; the ACC went large at 13-9 against BCS opponents, while the Big Ten (ever the Even Steven of conferences) went 10-10 overall.

He doesn't mention the Pac-10 at all--we've got no clue what the numbers are, either, so if a wise fan out there has the Pac-10's record and can substantiate it, please leave the link below--but wethinks it's got to be pretty average to not even mention. It's likely superior to the SEC's, though, which as a post-mortem stat only serves to remind that the SEC, whose fans (us included) are among the most vocal about conference superiority, have little to stand on in the way of actually validating our pride.

Look at the bowls for further proof of a continuing conference malaise:

--South Carolina gets a quick leg up on Missouri before Brad Smith catches fire like Rony Seikaly in the old NBA Jamz game and leads the Tigers back to a humiliating defeat of the Gamecocks. Yes, they made it to a bowl game, and that's pretty amazing given the SWAT Team cleanout of the athletic dorms over the Carolina offseason. But collapsing to a team coached by Gary Pinkel does not impressed make.

--Auburn fails to show up against Wisconsin in the Citrus Bowl, and the defense Brodie Croyle weeps about in his dreams fails to so much as dent John Stocco in their bowl game.

--Georgia walks into a buzzsaw in the Sugar Bowl, deflating a hometown crowd in Atlanta by blowing circuits whenever West Virginia ran a complex, baffling play called...the qb choice. We wanted Georgia DC Willie Martinez in a cash game of Connect Four after watching the Georgia D flailing after Steve Slaton and Pat White all night.

Somewhere, a Georgia fan just dropped their pig in a blanket.

These losses sting for the conference as a whole--especially when your conference champion goes in against the Big East champ and nearly gets their defense run out of the yard. LSU made a nice recoup for the SEC by killing a wounded Miami team in the Peach Bowl, and earns extra points for teaching their players the Shaolin-style use of a helmet as a weapon in the post-game tunnel brawl with the Hurricanes. Florida won, too, but even the Outback win reeks a bit following a late game defensive meltdown and a bad call to save Gators from a perfectly executed Iowa onside kick. And the 13-10 "look ma, no offense!" Cotton Bowl win for Alabama was nice, but didn't exactly break any existing stereotypes one might have had about the conference as a whole.

So Maisel's right: coupled with the bowls and the record, the long-debated downturn in the SEC's fortunes is there for all to see. Is there any sign of getting better top to bottom, though? Perhaps. We've broken them down into Bulls and Bears much like our screaming hero Jim Cramer would, looking at existing trends in '05 to pick the best and worst indicators for the overall health of the SEC in 2006.

--A nearly bottomless well of concern. The SEC again made the most money and had the highest attendance of any conference, which means that brick-throwing lunacy will likely win out over programmatic inertia. Kentucky may be safely exempted from this statement, of course.

--Improved out-of-conference scheduling. There's still patsies-a-plenty in the rosters (Western Carolina in the next-to-last game for Florida this year? We can't wait!) But the national trend towards intersectional scheduling has even bled southward this year, and will likely continue. Tennessee opens with Cal, while Vanderbilt, not to be outdone, has the chance to give Brian an aneurysm at Michigan. Arkansas gets their yearly fill of Vitamin Wrath when USC comes to town, Auburn will face Washington State, and LSU will fill out the Pac-10 exchange program by facing the nearly rebuilt Arizona Wildcats. Even lowly Miss. State will face a substantial intersectional foe in West Virginia, while Georgia will get the chance to hand Yoda Hawkins his first loss of the year again when the Bulldogs face Colorado. 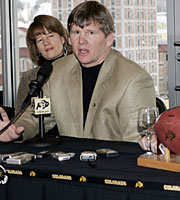 --Stability. New coaches settling in will continue to grow more comfortable. Miles can't really perform much better, but Orgeron and Meyer certainly can and will, especially with the recruiting sorcery going on in G-ville and the recent exodus of the Miami brain trust to Oxford. Even with his lackadaisical approach to recruiting, Spurrier's Cocks should improve, as well.

These four coaches will also place a premium on scoring points. Like it or not, powerful offenses could create a desperately needed buzz in a conference that has been low on sizzle lately.

--The old guard: Nutt, Fulmer, Brooks, and--gasp!--Croom. Not the most charismatic bunch, even with Nutt's obvious insanity in hiring a high school coach in order to grab a highly touted recruit. It's an indicator of the turnover in-conference when a third or fourth-year coach is considered senior-ish, but that's what Croom and Brooks are in the SEC at this point, and the senior-ish class of coaches may not bring much to the party this year if existing trends don't change. Tennessee's dismal year may have been an aberration, but Arkansas' s certainly wasn't, and despite his team's improved play last year, Nutt's...um...testicles are on the chopping block in Fayetteville. Croom is well-liked, but Miss. State's done little in the way of climbing upward from the Jackie Sherrill sized hole it still calls home. Oh, and Rich Brooks. Yeah...Rich Brooks.

--The cake in the 12th game. While scheduling improved, the teams of the SEC suffer from the same addiction many of its residents do: a damaging fondness for high-fructose corn syrup in the form of the Western Carolinas, Temples, Tulanes, and UCF's of the world. The obesity of the schedules could get worse, too, as some teams still have to fill the open slot on their schedules. Again, it's improving from what it was--fewer D-2 schools on the schedule, for sure--but a team with serious national ambitions could feel the sting of having a weak opponent on the schedule when the yearly BCS fiasco begins to heat up.

The SEC's schedules can still tend to the "on disability obese" side.

--So, Everyone still Cheats? We're praying for a quiescent offseason locally since the SEC's perennial bugabear--corruption--poses the greatest threat to the health of the conference in the form of NCAA sanctions and bad publicity. It's hard to imagine anything besides a full NCAA inquisition eclipsing Arrestafest '05 and Albert Means brouhahas of recent years...but it's early yet. Just when you think there's a new low, someone builds a new basement of low expectations for you as a football fan to inhabit. Whether that person will be wearing Chee-to orange this year remains to be seen...