--Whoa holy shit blinked and it's 21-0. We can't really say how Texas is doing this, aside from lining up and running en masse towards the end zone. Somewhere between the run and shoot and the flying wedge, there's the Texas offense.

--Gary Danielson keeps saying "Warshington" when he says the name "Washington." Gary doesn't seem to understand that in order to get away with a grand regionalism like this, he has to have an equally outlandish accent for the majority of the broadcast, not just toss in a mouse turd in the peppercorns of an otherwise radio standard American accent. Think of Dusty Rhodes, who in addition to having a crazy accent that lets him get away with verbal murder on the air, also comes dressed like black gay guy from the '70s. Try not to sicken at the thought of Gary Danielson in that outfit.

--Gary Barnett looks like a man resigned to the guillotine, and it's only the first quarter. Wouldn't be surprised to see a booth shot of of the Colorado AD wearing purple trimmed robes and turning his thumb downward in disgust.

--Comparing the manner of the two coaches does reveal something, though. Mack's twitchy--picking at his ears or his nose, futzing with his shirt, walking back and forth like he's gotta take a nasty jalapeno torpedo of a dump. Mack Brown is also a good coach, despite what you may hear. Compare that to Gary Barnett's manner--attempted stoicism that serves as nothing more than a fine veneer for the sheer panic running through his veins. Downright Zookesque in it's subliminal message: "Standing still with your chin held high= leadership."

--Oooh! The first of 837 ads for Codebreakers today!!! Sportstainmenttastic!

--Colorado can't move marbles against Texas' D, giving them a short field and forcing them to start each doomed drive with one foot in the grave. Gene Chizik anaconda defense comes to Big 12.

--One bright spot for Colorado: combine their qb with their two tight ends, and you've got a Joe Kickass name for a '70s prog-rock trio. Klopfenstein, Sypniewski, and Klatt. Could also work for a law firm or gastroenterology practice, we suppose.

--Barnett, facing a 4th and not much and already feeling the weight of an immense crushing at 21-0, declines to go for it and kicks a field goal instead. In a nearly similar situation a half a quarter later, he elects to go for it with the score at 31-3. You wait until then to get ballsy?

--Gary Barnett has something in common with Bob Davie despite being an overrated coach: both subscribe to the blast-furnace school of man-tanning.

--Nifty coaching note to the not oft-credited Mack Brown--Texas came out in a no-huddle to loosen up the squad and throw Colorado off. 42-3 at the half. Worked well enough.

--To steal Brian's line, OMG THE DR. PEPPER HALFTIME CHALLENGE!!! We'll root for each one of these poor bastards like they're Eddie the Eagle Edwards at the '88 Winter Olympics. 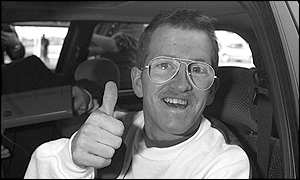 The only non-football star we'd buy a beer: Eddie "The Eagle" Edwards.

Today's first Dr. Pepper qb throws ten in a row (!) through the hole at five yards and then botches the million dollar throw. Still, he could have snuck away with a hundred grand if he hadn't then said this when asked what he was going to do with it: "First I'm gonna take care of my family and friends." F-u-c-k-e-d, right there on national television. After his brother-in-law's mail-order sausage business fails and his boys blow through twenty grand in a weekend in Vegas, he's gonna be lucky if he gets a flat screen out of this.

The other funny note from the million dollar throw: Lynn Swann, belting out to the Houston crowd before the toss, "His kids want to go to college!" Because without the throw, they'll be servicing U.N. peacekeepers in Kosovar brothels when they're eighteen, right?

--Punt block, 56-3. Maybe Barnett will melt into the ground like the Wicked Witch of the West at this point...or maybe he'll just spontaneously departiculate into an evil, foul-smelling vapor wafting through the open roof of Reliant Stadium, leaving only a pile of clothes and a headset where he once stood. Either would probably be an improvement on CU's chances here.

--Love the Pete Coors commercials where he's wandering aimlessly through the Colorado wilderness babbling about how cold Coors Light is. We've seen so many of them at this point that we're imagining that this is actually Pete, broadcasting live from a satcam, living out his suicidal Into the Wild fantasies in front of an audience of millions. By the end of the day he'll be saying this in front of a failing campfire with the glittering eyes of snarling wolves closing in on him. "Coors Light...so...c-c-c-c-cold..." Grrrr.....

Pete Coors: begging to be eaten by wildlife.

--All right, time for a real game here.

--And Keith Jackson!!! Even a Centrum Silver Keith Jackson is better than nearly any other announcer in the game, with the exception of The Nessler.

--And just when we were hoping for a game, Reggie Bush shows up. We've found the right word for Bush: wiggly. Not jukey, or even slippery...no, he's wiggly, and strong. Tackling him is like trying to bring down a cracked-out Rikki Tikki Tavi. The quantum back. Instant, contagious vertigo for defenders.

--Demoralizing stuff for UCLA. USC's not even trying to pass, and the guards for USC are pulling like pros while leveling crushing blocks. The line's surging 3-5 yards on every play AND they've got Reggie Bush.

--Frostee Rucker--a must have on our post-season All-Name Team.

--Brian Cushing, the freshman LB for USC, looks like a walking mugshot.

--Keith Jackson notes that a player's name may sound familiar to viewers. If you've been watching football for as long as Keith Jackson and you are still possessed of all your faculties, then what name doesn't sound familiar to you? And where will you be trolling for the sweet blood of the living that keeps your immortal soul half-alive?

--All three Bruin LBs collapsed in on the run on the first passing TD, leaving Jarrett skating with inside position for an easy score. Get us a fork for UCLA. We just watched a rout and know one when we see it, even in the first quarter.

--Big thumbs down to colored mouthpieces, especially of the yellow variety. Georgia Tech's just gives everyone a yellow grin with one conspicuous central gap, a.k.a. the instant Cletus grin. UCLA's and USC just look like shocking gum disease at first glance.

--Another blowout. Yup, lot of parity in that thur Pac-10.

--UGA's Will Thompson's got the braids out and has a mid-level fro giving him a scary resemblance to Ludacris in his lineup photo.

--UGA usually gets off to an oozing, bloblike start. Shockley throws a Grossman fifty yards into the waiting hands of Shawn Bailey. Whoaaa...

--Cedric Golston gets a mysterious injury leaving him in a fetal position, and Verne Lundquist comes up with the day's most eloquent piece of circumlocution:

"He might be ready to audition for a part in the Sopranos, if you know what I mean."

--LSU's cheerleaders look like they were pulled straight from an Ernest Bellocq exhibition.

--Georgia's defense is cracking out the tasers and pepper spray in the third quarter. A third straight dullsville here, albeit wayyy less lopsided than the prior two. On to the...

FSU vs. Virginia Tech: THE MUSBERGAME!!!

--Brent's not five minutes into the broadcast and he's on fire, pumping Gary for gambling advice on the national championship game. "Heyo, just trying to help my 'friends' out," he says in a ham-handed goomba Italian accent. All but admits to having mafia ties.

--Playing after a hiatus last week, we present the FSU offensive line, swatting away Adibi and Tapp like they were Wake Forest. Credit where credit is due; a week after being broken by Jeremy Mincey and company, they're playing like an FSU line.

--A scenic shot of the St. John's river in Jacksonville. Brent will pounce in three...two...one..."It's the only river in North America, Gary, that flows from south to north." What we would give to hear Musberger go Ron Burgundy here and just say, "and I think, the only one in the world, Gary," and not back down from the statement for the rest of the broadcast.

--Insider's scouting report from Ernie Sims: talks about wanting to "get big hits" in on Marcus Vick. Ernie Sims wants to date Marcus Vick? Are we hearing this right?

--OMG the third Dr. Pepper Challenge!!! ACC champ dude gets throwing advice from Gino Toretta, takes first ball and throws a perfect strike to a streaking George Teague, who takes it the other way for six. Chip Craver, as he's calling himself, still nails all ten before missing the million dollar throw. Madame Swindle then peels us off the ceiling, we're so jacked.

--FSU, in one inexplicable stretch in the first five minutes of the third quarter, has made it a 20-7 game, and Marcus Vick is now playing the kind of game we always resort to in video game matchups against our brother, Cuddles Swindle: hopelessly down, throwing deep to no one in particular, and shitting out fumbles like we've got football cholera.

--If the transitive property has any predictive strength in football, Florida would have straight out murdered Virginia Tech.

--Musbergerism: "Tough day at the office for ol' Frank Beamer." Like we don't already imagine that Brent still dwells in world where Frank Beamer goes home, puts his fedora on the hat rack, and immediately steps into a pair of slippers before crashing on an easy chair to receive the highball his apron and pearl-wearing wife had ready for him. "That's when they knew how to treat a man, Jackaroo..."

--Bonus! Vick pulls a Frerotte and sprains his ankle while celebrating.

--Pete Coors is still wandering around the Colorado hinterlands just begging to be eaten by bears. It's time to put a deflating championship Saturday down.