Last season saw the seasons for South Carolina and Clemson end in a debacle in which a rumble the likes of which hasn't been seen since they filmed the Outsiders ensued at the conclusion of the game. This year they vow to shake hands and play nice in the sandbox. That doesn't mean that Spurrier won't take his shots at Bowden in the off season booster circuit. 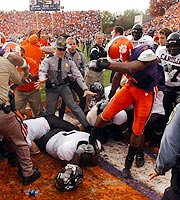