Share All sharing options for: DISSENT: PEOPLE VERSUS URBAN MEYER.

On writ of certiorari on "KARMA IS A BITCH, MR. FOLEY."

We disagree with the opinions and judgement brought by Justice Montana in his opinion, handed down on the 13th of November, 2005, in the case of "Karma is a bitch, Mr. Foley." We hereby seek to present a dissenting opinion, addressing the numerous errata, lacunae, and other mistakes leading Justice Montana and others to make in condemning the nascent career of Urban Meyer (referred from here as UM) at the University of Florida vis-a-vis their loss to South Carolina, coached by Steven Orr Spurrier, former coach of said Gators (referred to within as SOS.)

Jst. Montana refers to the German army rolling through the streets of Paris in 1939. A personal note should be made here in the interests of full disclosure: we know Montana, and would like to submit our own personal testimony here: he was, and perhaps still is, an avid player of the esteemed game of Axis and Allies, a detailed expansion on the game of Risk where players assume the roles of the major principals in a World War Two scenario. Perhaps his history is rusty; the Germans waited until 1940 to take their mass field trip to Paris, forcing the British to evacuate at Dunkirk and the French to the cafes to write desolate, existential essays protesting their occupation while Panzers rolled down the cobbled streets of Paris.

The shame and consolation of many high school dorks on Friday night: Axis and Allies.
3.

The overall thrust of the argument--that Florida's Jeremy Foley, the current AD and hirer of both UM3 and SOS made a poor decision in insulting the interested SOS and spurning him in favor of UM3--is baseless, erroneous, and fantastic in nature.

The only evidence anyone --anyone, columnists and message board "insiders" have touted--has been refuted by the public statements of both Foley and SOS. These two individuals have a long and established record of public honesty, sometimes so much so that they make comments much to their detriment.This court cannot and should not predicate their judgements on baseless assumptions such as these.

Foley and his representatives go so far as to answer emails from individual fans personally, even when they are in opposition to their hiring choices. And though it is outside the chosen jurisdiction of this court, it should be noted that Foley's hiring choices in other, lesser sports have enhanced the profile of the university as a whole. Foley's lone bad hire came in his most prominent department, the football program, a gaffe the fanbase has been loath to forgive him for. (Foley hired (NAME REDACTED) in 2002 to replace SOS. He went on to fail, suck, and bluff his way through three muddlesome seasons ending in his firing following a loss to Mississippi State in 2004.)

The third major error is the assumption that, if SOS had indeed been hired back as head coach at Florida, this year would have gone differently than it has.

By definition, we must assume that in some respect this is true, but we do not have to accept that it the results would be better. More importantly, we do not have to assume, ceteris paribus, that better results would even be judged as being successful. SOS's past experience would have tainted any future perception of his success. Indulge the arguments of the court for a brief moment and consider this alternate scenario.

In early 2005, Utah coach UM3 leaves for his dream job at Notre Dame. SOS returns to his alma mater for a second tour as Florida. Skip Holtz takes over at South Carolina and Charlie Weis accepts the head coaching job at LSU. SOS goes on to lose to LSU and Alabama while going undefeated in the SEC East before losing a rematch with LSU in the SEC championship and earning a spot in the Outback Bowl.

Would this be considered any better, really? How many fans would be, in this alternative reality, any happier with this? How many fans would accuse Foley of going with the retread over new blood? A coach whose best days were behind him and who was good for three losses and the Outback Bowl every year? This dissent proposed that the fanbase would go back to the same critiques the Master Shake variety of fan always lobbed at SOS: that his teams were soft, that the coach spent too much time on the golf course, and that a SOS UF team would inevitably disappoint in the end following their initial "shock and awe" heyday of the 1990s.

Combine these factors with a tenous relationship between SOS and Foley and UF fans find themselves in the same position as they were in 2001: waiting for SOS to move on to the next NFL opportunity or challenge while losing two games a year and coasting through the schedule on the strength of his clipboard and godlike status in Gainesville. The SOS of Columbia 2005 would not and could not exist in his old haunts in Ben Hill Griffin Stadium.

Spurrier, 2005 model: available only in Columbia.

UM3 shares none of these.

He has success--astonishing success--at each of his prior places of employment. He was chosen as part of a long hiring process in coordination with a university president who had firsthand knowledge of UM3's competence. He has also clamped down on a football team formerly known more for its existence as a privileged fiefdom apartfrom the university than as an active participant in university life.

Fifth and finally, the piece assumes that UM3 lacks the tools or the intellect to solve the glaring problems facing the Florida football team. Again, prior evidence runs contrary to this point. UM3 could finish the season with an 8-3 record given a tough victory against an FSU team in the Swamp--not an unlikely occurrence given the Gators superb record at home this season and FSU's collapse going down the stretch this season. Even with a loss in the bowl game (or a reversal of the scenario, a loss to FSU and a victory in the bowl game) UM3's first team could go
8-4, a reasonable facsimile of several prominent head coaches' first years at their respective instiutions:

All came in rehabbing major programs and all went on to success. (NAME REDACTED HERE) was fired due to a trend: continuing disappointment coupled with inexplicable losses to previously unheralded opponents. UM3's three losses this season, while excruciating, came to a stacked LSU team in Baton Rouge, a peaking Alabama team in Tuscaloosa, and a nutkick loss to the best pure coach in the nation, SOS, in Columbia. One year does not a trend make. Past history indicates UM3 has the wherewithal to take a first-year's scrimmage and turn it into a second-year's bloodbath for opposition. Even given the dubious assumption that the SEC is that much difficult than other major conferences, this still holds with past patterns of successful head coaches in year one. (Unless we're talking about SOS or Larry Coker, both anomalous in their profession for different reasons.)

Excusable? Not in the opinion of this court. However, we do reserve some different judgements re: continued UF mediocrity.

Chris Leak is a slightly above-average quarterback. The most unpopular of propositions. Leak never met a checkdown he didn't like, a blitz he couldn't crumple beneath the heat of, and a hot read he couldn't miss. Slow to read defenses and adjust to different looks. Inaccurate on the deep ball and floaty on the the short passes. Short, but without the typical benefits of athletic, sprinty short qbs, resulting in passes batted down at the line of scrimmage--often with disastrous results. A painful acknowledgement that this court is aggrieved to hand down but, nay, feels compelled to. Can't be counted on to take over a game. 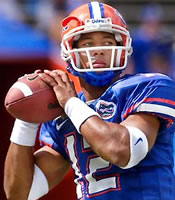 Being a qb named "Chris" in the state of Florida seems to give you a long, long leash.

Vernell Brown's injury could not have come at a worse time. The loss of Brown forced shaky players--Kyle Jackson and Reggie Lewis--into action against a truly gifted offensive coordinator bent on exposing the weaknesses revealed in the Vanderbilt game. The backbreaking play of the game--a long td to Sidney Rice caused by two missed tackles--destroyed the momentum built up by Florida in the previous quarter. Holding on against FSU will require prayer, curses, animal sacrifice, and a Battle of Agincourt-esque stand on the part of the secondary.

Meyer still has much to learn and hard decisions to make. His offense will either have to remove decision-making entirely from Chris Leak's hands, dumb down to a relatively Neanderthal level with Leak making decisions, or switch quarterbacks entirely. His defense will have to continue to develop. The offensive line must improve and grasp the zone blocking game coaches like Kirk Ferentz have installed so effectively at Iowa. And with two scores to go and nine minutes on the clock, you might want to hurry up. Meyer has to lose the fear he's sometimes coached with this year or the heat will really turn up in year two when fans looking for real trends start to spot them.

But (NAME REDACTED HERE), part 2? Far from it. It's the easy thing to break out the shovels on the neonatal UM3 era in year one. It is not the rational or fair thing to do, however, in the opinion of this court.

It is so decided.