MR. FOLEY, KARMA IS A BITCH

Share All sharing options for: MR. FOLEY, KARMA IS A BITCH

In 1939, as the German's were busy rolling through the jardins of Paris, South Carolina played the Gators and came away victorious. But as South Carolina was destined to suck for some karmic reason, they underwent decades of mediocrity. In 1991 South Carolina joined the SEC just as the conference was embarking on a decade of excellence in which there would be multiple national championships and annual bowl week dominance. Year after year, the SEC was a factor on the college football landscape with Alabama and Auburn taking their turns out west early in the decade and Tennessee being a top 5 team almost every year. Yet one team rose above the rest thanks to a brash offensive guru coming home to awaken a sleeping giant of a program. Former Heisman winner Steven Orr Spurrier put the Gators on the national map, making them the most fun team in college football to watch and a top five program for the decade despite a murderous schedule that included another powerhouse in Florida, the Seminoles. During this period of time, the Gamecocks were an afterthought as they took their beating year in and year out.

Florida Athletic Director, Jeremy Foley comfortably road Spurrier's coat tails to his own level of prominence. The football success kept the boosters happy and helped increase Foley's checkbook, which he promptly parlayed into making UF's facilities second to none. Even UF Basketball improved in the 1990s. Foley was happy to bask in the glory of the SEC's best overall sports program, but like Narcissus before him, he fell in love with himself and forgot the debt the program owed to the HBC.

To think, this big-toothed buffoon was once the hottest AD in the country.

The story from there is well known. The Head Ball Coach (who was reportedly ticked at the large toothed AD for not supporting him when he tried to stand up for Earnest Graham) finally gave in to the lure of the NFL and worked for meddlesome owner, Daniel Snyder. Spurrier never had control of that team and they remained a mediocre squad during SOS' tenure (a funk which started before he got that and has continued until this season). Foley failed miserably in trying to replace the legend and inexplicably settled on the Zooker after a very brief search of candidates. After 2 and a half up and down seasons, Foley finally had to admit his egregious error and pull the plug on the great Zook experiment. The stage was set for the Head Ball Coach to come riding back to town on his white horse and take the Gator's back to prominence. This is where UF's Karma went horribly, horribly wrong.

Not satisfied with hiring one of the best coaches in college history and the one who happened to made UF one of the most desireable jobs in college, Foley again fell victim to his own pride. Reports were swirling about Spurrier's return, including interview's with Spurrier's own brother who said that all Foley needed to do was ask. So, what does Foley do? He tells Spurrier that he can interview for his old job back. WTF???? (There are those like Orson who say Spurrier wouldn't have come back, but I say that is revisionist history. He just wanted to be told that it was his to turn down). A decade of dominence wasn't enough of an interview? In actuality, this was the equivalent of telling Spurrier to go fuck himself as Foley well knew that Spurrier refused to interview even for NFL jobs and would take this as a personal insult. Foley wanted to be the big man on campus and having Spurrier back would be admitting he couldn't do it himself. Instead, he went out and paid "Great Coach" money for an unproven and, at this point, only slightly above average coach from Utah who thought that he understood football better than anyone else. (Why go vertical when you can go horizontal?) Ever since that day, the football gods had deemed that Spurrier would have his revenge. That revenge began on Saturday as Spurrier took a team with second rate talent and humiliated a team with National Championship caliber talent. The difference between the level of coaching was stark and obvious as the Gators couldn't even get the right number of players on the field at times. Also, Meyer seemed content to hog the ball and run out the clock DESPITE BEING DOWN BY 11!!!! Even Zook would have tried a hurry up offense. Now the Gators will not be playing for the SEC championship despite a Georgia loss. 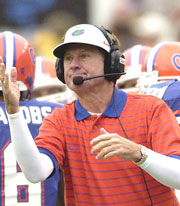 Spurrier would have hung 60 on Meyer if they switched players.

Karma can be a bitch. And now the Gator fans are paying for the bad Karma created by the Chiclet-mouthed neanderthal running the athletic department. I have the foreboding feeling that as long as Foley is at the helm, the Gators will continue to be an SEC also-ran, struggling against the likes of the Vanderbilts and Mississippi State's of the world and losing 3-4 games a year. So Jeremy, do the Gator fans a favor and have your resignation on Machen's desk by sundown tomorrow.

Spurrier ruined the Gator's season and gave Foley an nice "Fuck You" in the process.