Maggie at SI On Campus--we're tight like that, you know, first-name basis, sharing hot tubs in Davos with Henry Kissinger and George Soros, etc.--invited us to compose our all-time team as we saw fit. We'll take the capricious time machine approach in picking our team, taking players from both the present and the past to make up the roster of the all-EDSBS team. See the final composite team here at SI On Campus.

Quarterback: Rohan Davey. Take a 52-year old Jamaican lifeguard with the dt's and put him in a uniform: that's the best description of the chicken-legged, barrel-chested, improbably tenacious form of our choice for QB, Rohan Davey.

Rohan had much in the way of admirable quirk. First, he licked his hands a lot, often obsessively, sitting on the sidelines like a huge, sweaty, pink-tongued cat. Rohan also acted like he felt eighty, walking with a distinctly uncool limp even when uninjured and generally looking like a grumpy retiree preparing to pass a kidney stone. Davey not only looked to be about fifty, he also sweat like an old man, perpetually wearing a fine sheen of nervous old man lather as he limped to the sideline for a shot of Geritol and Ovaltine during tv timeouts.

Toss in the fact that he threw ropes, could take a hellacious beating, and made you laugh just looking at him, and you've got yourself an EDSBS-quality qb.

Our two wideouts would be:

1. Michael Irvin, Miami-FL. A wideout needs to be able to penetrate, score and get off a line quickly. Considering his admitted past fondness for loose women and cocaine, who fits the bill better than the Playmaker?

Running back: Pooh Bear Williams, FSU. A fullback, but we'll sneak him in for the name and the fact that though the 'Noles had him listed at 275, everyone knew he was just a Monte Cristo or two shy of 500 pounds. Ate his way off the FSU team and forced team trainers to stand on the sidelines with the crash cart charged and the paddles greased and ready in their hands. Good enough for us to name him a starter.

Tight End: Leonard Pope, UGA. Ever notice how guys named Leonard are always huge or otherwise total badasses? There's something about the geeky name that spurs people into total ferocity. The only way he could be badder is if his middle name were "Sue".

An Offensive line (not individual players, a team's line): The Miami line from the Ken Dorsey teams. Partially because they were very, very good, but also because they spent their free time clubbing in South Beach and knocking out professional boxers in street fights. (Bryant McKinnie to Shannon Briggs, specifically, with one punch.) Again, things we want in our team profile.

A defensive line (team): The Nebraska Cornhuskers, 1995. Fueled with the best bootleg Mexican pharmaceuticals and livestock supplements money can buy. Danny Wuerffel just lost his house and his ministry in New Orleans to Katrina, but he's coping nicely. Why? Thanks to this Nebraska line, he's already seen the worst thing life can throw at him.

Linebackers (team) Three cloned Dick Butkuses. Pair a giggle-inducing name with a berserker of a linebacker and you've got our starters. If we can engineer some serious emotional problems in a couple of them, they'd be damn near perfect.

Defensive backs (team)Arizona State, 1997. We just want to have Mitchell "Fright Night" Freedman on our team. Wore facepaint and had a legendary nickname; subsequent legal troubles and inability to make the pros have only increased his allure as an EDSBS starter.

Offensive coordinator: Norm Chow. We can't joke about everything here--he's the best we've ever seen, and that includes Spurrier. Can reduce defensive coordinators to tears. Mediocrity in the pro game will only confirm our high opinion of him.

Head coach.We're biased--Gator fans, here--but why not pick Spurrier in his prime? No one was more entertaining to watch. He called deep passes on 4th and 11 from his own 40. He ran up the score. He screamed at coaches when they refused to run up the score 'til the whistle on him. He set a coaching record for "getting caught digging for nose goblets on national television." He acted like a father of three gambling with the milk money at the dog track. Evil Genius--we'd take the mid-90s version any day.

Flaming couches. Jack Daniels. Beards. Bags of urine and D-cell batteries tossed into visitor's sections. Extracurricular wrasslin' in the stands. WHOOO-HOO! The meanest, and thus our choice for best fans. 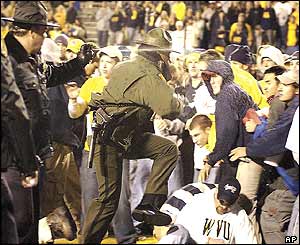 Pepper spray, you say? They call it the sweet taste of victory in Morgantown.
Mustache (in honor of mustache Wednesday created by EDSBS.com)

Pat Hill, Fresno State. The ultimate. Every day is Mustache Wednesday for him.